Use discount code vestibular.org and 10% of your purchase goes to VeDA.

The vestibular system can be divided into two main systems: the central system (the brain and brainstem) and the peripheral system (the inner ear and the pathways to the brainstem). The inner ear, known as the labyrinth, contains two primary structures: the cochlea, responsible for hearing, and the vestibular apparatus, responsible for maintaining balance, stability and spatial orientation.

THE ANATOMY OF THE LABYRINTH (INNER EAR) 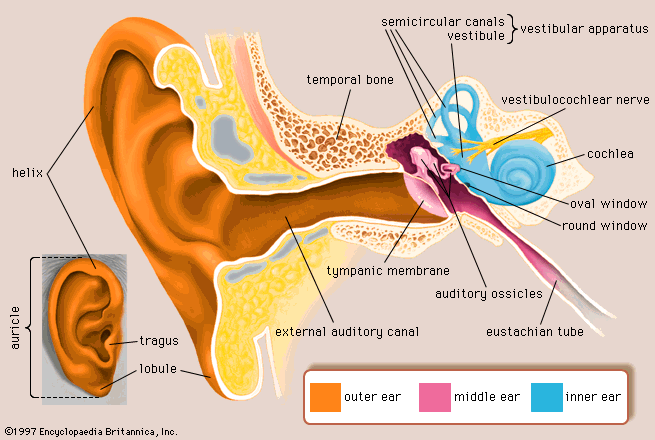 Think of this as a hose within a hose, both filled with fluid. The fluid within the bony and membranous labyrinth both contain sodium and potassium, but in different ratios. Conditions that affect the stability of these ratios, such as Meniere’s disease, can cause vertigo (the perception of movement, usually spinning), dizziness, nausea, vomiting, ear fullness and tinnitus. 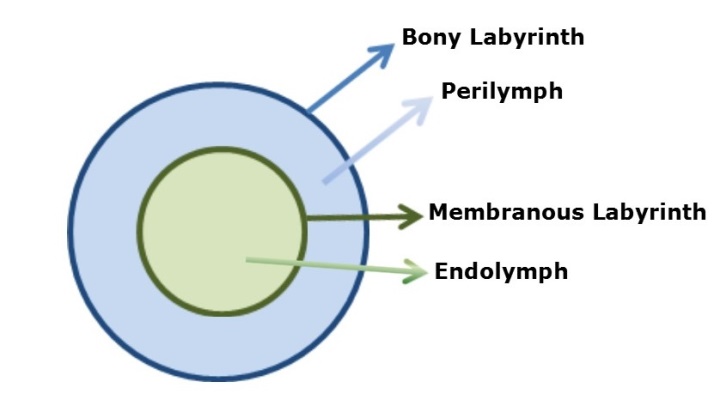 The peripheral vestibular system (the non-auditory portion) has 3 semicircular canals that detect angular motion and 2 otolithic organs, the utricle and saccule, which detect linear acceleration and deceleration.

THE OTOLITHIC ORGANS – THE UTRICLE & THE SACCULE

Collectively, the utricule and saccule make up the vestibule. The utricle detects linear motion primarily in the horizontal plane (like a car moving forward or backward) while the saccule detects motion primarily in the vertical plane (like an elevator moving up or down). Each otolithic organ has hair cells embedded in a gelatinous material (like jelly) with calcium carbonate crystals, called otoconia, attached to the surface (see picture below). Imagine sprinkles on top of ice cream, with the sprinkles representing the otoconia. 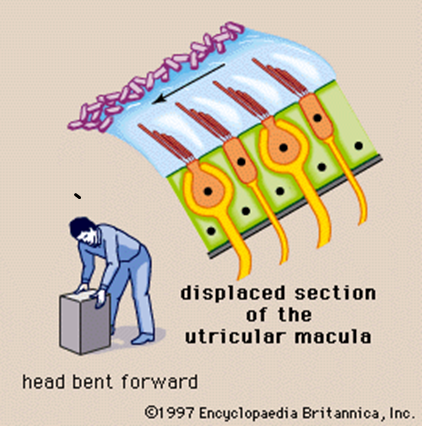 Many refer to otoconia as “ear rocks,” which are responsible for a very common condition known as benign paroxysmal positional vertigo (BPPV). In BPPV “ear rocks” fall off the “jelly” (sprinkles fall off the ice cream) and into one of the semicircular canals with changes in head position, causing vertigo, nausea, and sometimes vomiting. The otoconia (ear rocks) serve a valuable purpose when they are in the correct places within the utricle and saccule. They enable the otolithic organs to be sensitive to gravity (see picture below). For example, when you are in an elevator going up you do not see the elevator moving. However, even though you are standing still, you know that you are going up! The otoconia allow you to sense that movement as long as there is a change in linear motion. When you take off, land, or hit turbulence in an airplane you detect this motion because the otoconia are sensing linear acceleration and deceleration. Once you are at cruising altitude while flying, you do not realize that you are traveling 500 miles per hour since there is no acceleration or deceleration.

Unlike the otolithic organs, the semicircular canals are not sensitive to gravity since there are no otoconia normally in the canals. The 3 canals in each inner ear are oriented roughly 90 degrees to each other (like the corner of a room between 2 adjoining walls and the floor). Each semicircular canal has one bulbous shaped end called an ampulla. In the ampulla is a structure that is situated like a divider called the cupula (see picture below). In the cupula, there are multiple hair cells with bundles of hair that project up into the cupula. Within the hair bundles, there is one long hair called the kinocilium and multiple short hairs call the steriocilia. The cupula gets pushed or pulled during angular movement from the flow of endo­lymph, causing the cupula to bend.

The smaller hair cells (steriocilia) either move towards the large hair cell or away from the large hair cell in response to the direction the cupula moves. This information is converted into an electrical signal which ultimately produces corresponding eye movements. 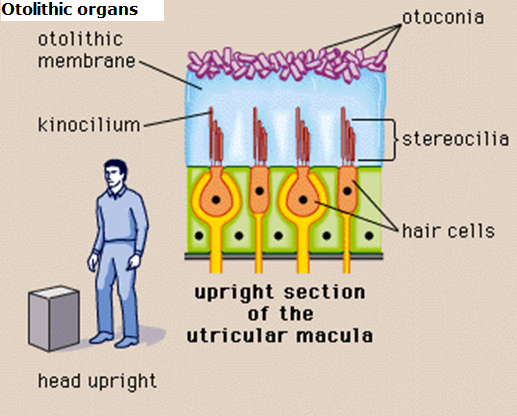 The Nervous System in Action, 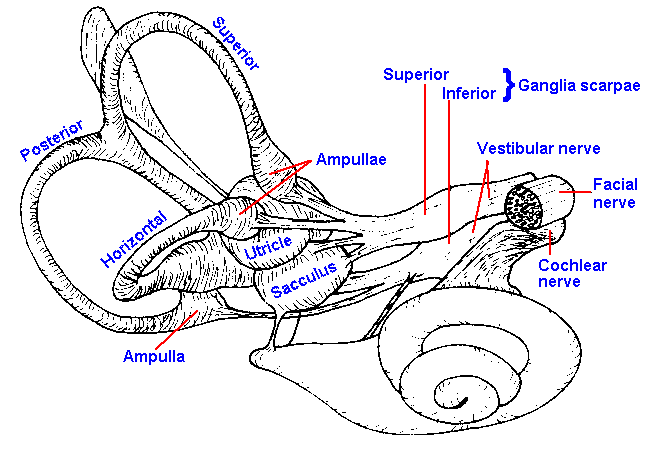 You have 2 vestibular nerves, one from each ear, which must work together when sending signals to the brain. When one nerve’s signals are disrupted, this will immediately cause vertigo, dizziness, imbalance and often nausea and vomiting, which can last for several hours to several days until the brain learns how to reinterpret the signals. When the system does not “reset” on its own vestibular rehabilitation helps to teach the system how to readapt and function.

The blood supply follows a similar path as the nerve supply and, when compromised, will result in similar symptoms.

The final peripheral structures to briefly mention are the oval window and round window, two openings from the middle ear to the inner ear, closed off by membranes. They help to transmit sound.  If these structures are compromised, allowing fluid to enter into the middle ear (known as a perilymphatic fistula) they may produce unwanted symptoms such as vertigo, imbalance, fullness in the ear, hearing loss, poor tolerance of loud sound, nausea and vomiting. A third location where a fistula can occur is above the superior semicircular canal where the bone between the canal and the brain opens, known as Superior Canal Dehiscence. 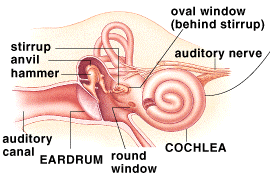 THE FUNCTION OF THE PERIPHERAL VESTIBULAR SYSTEM

As previously mentioned, the vestibular system is responsible for maintaining balance, stability and spatial orientation. There are several reflexes responsible for these responses. Similar to tapping your knee with a reflex hammer and your leg extending out, there are responses that occur with movement to keep your vision and body stable.

Vestibular Ocular Reflex (VOR):  is a reflex that coordinates eye and head movement in order to keep an object in focus. The VOR is one of the fastest reflexes in the human body. Head movement must be compensated for almost immediately by the eyes in order to have clear vision. This means when your head moves one direction, your eyes must move in an equal and opposite direction at virtually the same speed to keep a target in focus.  For example, when you are walking your head is not staying perfectly still. It moves side to side and up and down as you walk, yet objects don’t sway or jump up and down (if the VOR is working properly). The VOR triggers your eyes to move in the opposite direction of your head to keep objects in focus.  If the VOR is deficient, you may experience oscillopsia (objects appear to blur or jump) when you are in motion. Your VOR works best at frequencies greater than 1 Hz, which is equivalent to turning your head to the right and then to the left in one second. If your head is moving slower than 1 Hz your visual system will take over the responsibilities. Routine daily activities generally range between less than 1 Hz to about 4 Hz, while walking averages between 2 to 4 Hz. Running may challenge the system up towards 10 Hz or greater depending on speed and terrain.

Testing the VOR involves fast head movement while looking at a fixed target, known as a Head Thrust Test or Head Impulse Test. When done manually the healthcare provider is looking for a delayed response in the eyes. A more sophisticated way of testing the VOR is called video head impulse testing or vHIT. It uses special infrared goggles and a computer to analyze results more precisely and to pick up deficiencies that are not visible to the human eye. It tests all 6 canals. The equipment is only recently available and still quite expensive so it is only found in limited locations.

Vestibular Collic Reflex (VCR): A reflex that, in response to information from the otolithic organs and semicircular canals, activates neck musculature to stabilize the head.  We do not currently have a controlled way to test this reflex as the pathway is not fully understood.

Vestibular Spinal Reflex (VSR): is a reflex that maintains your posture and stabilizes your body to maintain an upright position.  It refers to reactions that happen below the neck, such as staying on a bucking bull. Through a serious of events, an impulse is sent to your spinal cord to active muscles to keep you upright.

Recall that the 3 semicircular canals sense angular motion and the 2 otolithic organs sense linear motion relative to gravity. In part, these structures can be tested without sophisticated equipment if you have a knowledgeable provider who understands what they are looking for. However, the system is tested in more detail and specificity when sophisticated equipment is available. Infrared Video Frenzel Goggles allow for observing the eyes in the dark (without the patient focusing on a target), enlarge the eyes on a screen for easier viewing and records the eye movements for repeated playback. VNG (video nystagmography) software converts the eye movement into a computer generated signal, also increasing the likelihood of an accurate diagnosis. As with most vestibular equipment, this equipment is expensive and found in limited locations, usually clinics that specialize in vestibular testing and treatment. Other computerized testing exists, such as caloric testing (which tests the horizontal canals at a very slow frequency), VEMP (vestibular evoked myogenic potential) testing and rotary chair testing (hallmark for confirming deficits in both vestibular systems) to test other portions of the vestibular system or to confirm a suspected diagnosis.

Since there are direct connections from the inner ears to the eyes and brain, injuries or deficiencies in any number of these structures can produce dysfunction in balance, hearing and abnormal eye movements. Testing exists to evaluate the response of the eyes in order to determine if there is dysfunction in the peripheral, central or both vestibular systems.

VeDA’s publications are protected under copyright. For more information, see our permissions guide at vestibular.org.

This document is not intended as a substitute for professional health care.