Symptoms of Torn Artery Are Easy to Miss 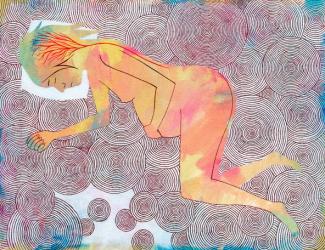 Karin Satrom, a 35-year-old Brooklynite, had been feeling fine through 23 weeks of pregnancy when one night she said she became “very, very dizzy, as if I were drunk.” Her husband suggested that she lie down, but even with her eyes closed, the room continued to spin.

Still extremely dizzy and seeing double in the morning, Ms. Satrom called her doctor, who sent her directly to New York Methodist Hospital. No pregnancy-related reason for her symptoms was found, but a neurologist suspected a tear in an artery in her neck that supplies blood to the back of the brain.

An M.R.I. confirmed the diagnosis, vertebral artery dissection, and showed that the transient ischemic attack, or mini-stroke, she had experienced as a result had left no lasting brain damage.

Ms. Satrom was immediately given an injection of Lovenox, an anticoagulant that she must continue to inject twice a day until the baby is born, sometime in March. Then a second scan will be done to see if the artery has healed.

Now six weeks later, Ms. Satrom has religiously followed her doctor’s orders to “do nothing that involves turning my head — no swimming, no driving,” and has remained symptom-free.

Dr. Wouter I. Schievink, a neurosurgeon at Cedars-Sinai Medical Center in Los Angeles and an expert on vertebral artery dissection, said Ms. Satrom was lucky to have seen astute physicians who zeroed in on the cause of her distress before it resulted in a full-blown stroke. Not everyone is as fortunate.

A dissection is not a hole in an artery, which would cause extensive bleeding. Rather, a tear occurs in one of the inner layers of the vessel, which results in a pooling of blood in the wall that partly or completely closes the flow of blood to the brain.

Alternately, a dissection can result in a bulge — an aneurysm — on the outer wall of the vessel that may or may not be painful.

Although vertebral artery dissection is one of the most common causes of stroke in young adults, it may cause no noticeable symptoms at first. And when symptoms do occur, they are often nonspecific, like headache or neck pain. Symptoms may be ignored until it is too late or mistakenly attributed to a far less serious condition.

Ms. Satrom’s dizziness, or vertigo, was the most commonly reported symptom in a review of 75 studies involving 1,972 patients by Dr. Rebecca F. Gottesman, a neurologist at the Johns Hopkins University School of Medicine, and co-authors. Vertigo afflicted 58 percent of those in the studies, headache (usually in the back of the head) 51 percent and neck pain 46 percent.

But nearly one-quarter of patients had no head or neck pain at the time of diagnosis.

Dizziness, headache and neck pain are extremely common and most often not related to a vertebral artery dissection. But when such a symptom occurs suddenly and seems out of the ordinary, emergency medical attention should be sought without delay, Dr. Gottesman said in an interview.

A prompt diagnosis is vital, she and her co-authors wrote, because the greatest risk of a stroke occurs in the first few weeks after an artery tears. Some tears — the percentage is unknown — never cause symptoms, however, and heal on their own without treatment, Dr. Gottesman said.

A vertebral artery dissection can result from a sports injury or a car accident. Minor traumas, including a forceful cough or sneeze, vomiting, extreme extension of the neck (as might happen in a beauty parlor, when painting a ceiling, or practicing yoga) or during chiropractic manipulation have been reported to cause dissections. The role of chiropractic manipulation is disputed, because people may seek chiropractic treatment for neck pain that is unknowingly the symptom of an existing dissection, not its cause. “If a neck pain comes on suddenly for no good reason or seems in any way unusual, people should think twice before going to a chiropractor,” Dr. Gottesman said.

Fewer than half the patients in Dr. Gottesman’s study reported a recognizable trauma that could have caused the tear, and less than 8 percent had a connective tissue disease like Ehlers-Danlos or Marfan syndrome that increases the risk of a dissection.

The severity depends on whether the dissection occurs before or after the affected artery enters the skull. The latter causes a hemorrhage between the brain and skull in more than half of cases and has a much poorer prognosis.

An M.R.I., usually done using a contrast agent that highlights the arterial structures, is now the gold standard for diagnosing a vertebral artery dissection.

The main risk of a dissection is the formation of a clot, or series of clots, that can travel to the brain and cause a stroke. A transient ischemic attack is a warning sign of a possible stroke and should always be taken seriously.

Treatment with an anticoagulant, most often warfarin (also known by the brand name Coumadin), for several months or longer is needed to head off formation of a brain-damaging clot. There has been no controlled clinical trial to justify this approach, but experts attest to its logic. (Ms. Satrom was given Lovenox because it is much safer than warfarin during pregnancy.)

Although most dissections heal on their own, further intervention is occasionally needed, as when stroke-related symptoms persist after six months of anticoagulation. The damaged artery may then be treated by inserting a stent or coil.

If a dissected artery becomes completely blocked and continues to cause symptoms despite effective anticoagulation, Dr. Schievink said, a surgical bypass can be done to replace the damaged part of the artery.