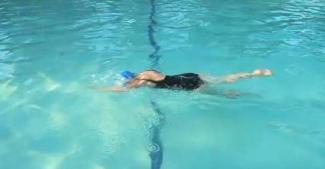 Betsy Stengel is a Meniere's patient and a life-long swimmer. In this article she describes the challenges a swimming pool poses for a vestibular patient, such as the dancing reflection of light below the pool's surface, and how she faced her demons to reclaim her life.

SWIMMING WITH A VESTIBULAR DISORDER: A DIZZY CONCEPT?

Rolling over carefully to keep my head straight, I open my eyes and look up at the ceiling. Nothing is moving. That’s good. I turn a little more to see out the window for a hint of the weather.  Gray, low clouds could mean low pressure that can cause anything from headaches to vertigo.  No…not using that as an excuse today.  I’ve been waiting four months to get back in the pool.  I can do this.

Half an hour later, I step out of the women’s locker room onto the pool deck, hoping that I’m showing a confidence I don’t feel. Good, the pool is empty save for 2 women exercising in the far lanes. I wave back at their greetings acknowledging my several months’ absence. No distractions right now, please. Fortunately the furthest right lane, the one with the ladder, is free.  No more thinking about this, let’s get to it, I tell my brain.

I’ve been doing a lot of talking to my brain lately.  Current research on vestibular (balance) disorders as well as tinnitus (ringing in the ear) shows some success in slowing dizziness and reducing noise in the head through meditation, including self-communication with the brain.  For the past four months I have been struggling with vertigo, imbalance, fatigue, and tinnitus.  For several years, I’ve been quite deaf in my left ear, and the hearing in my right ear is declining, so I wear hearing aids.  These symptoms and several other unpleasant challenges are due to Meniere’s Disease, a condition in the middle ear that I was diagnosed with some twenty-five years ago.

I am not alone in my dizziness.  Meniere’s Disease is but one of the many vestibular disorders experienced by about 69 million American adults over the age of 40 at some point in their lives. That’s more than 35% of the US population. Many of these vestibular conditions become chronic, making life truly challenging for these patients and their families.  Moreover, tinnitus is not only a Meniere’s symptom.  In total, 60 million Americans experience tinnitus at some level, with 16 million having severe enough symptoms to seek medical attention and about 2 million become truly debilitated by the condition.   This number has increased as many veterans from Iraq and Afghanistan report serious problems with tinnitus.  In fact, for three consecutive years tinnitus has been the number one service-connected disability because it is most often the result of extreme noise exposure from either a single impulse noise or the accumulation of noise exposure.

I consider myself fortunate  because while I do experience prolonged periods of Meniere’s, usually when I’ve become overtired and stressed, a treatment I received about 12 years ago that is not successful for many Meniere’s patients, greatly reduced my vertigo symptoms and has allowed me to live a fairly “normal” life, including  swimming and yoga, both of which I consider important to maintaining my health and wellbeing at every level.

So here I am standing at the end of the lane, adjusting my cap, ear plugs, and goggles, partly to give me time to settle down and focus on why I’m doing this. I nod my head as I remember my visit a few weeks ago with my ENT (ear, nose and throat) specialist, who is one of the world’s experts on Meniere’s Disease. Dr. Rauch asked me what I missed most since dialing back my life because of dizziness, tinnitus, and overwhelming fatigue. “Swimming,” was my instant reply. “Then for goodness sake, get back in the pool,” he answered, adding, “just trust your judgment about how long and how often.”

“Here I am, Dr. Rauch,” I say quietly.  No more delays. I glance at the wall clock, not because I’m timing for any races but because I like to start on an even number of minutes and seconds. Silly habit but today it helps ground me to my routine.  Three deep breaths, and I finally push off the wall and glide under the water, arms locked in front, body “straight as a pencil” (Coach Bill’s term), legs pulled together for a few short kicks to keep me under water until I surface beneath the flags.  After that it’s just habit – arm following arm above and below the water, check my catch, head rolling every three strokes to breathe.  I touch the wall at the end of the lane and repeat the push-off and swim routine back to the starting point. After I turn again and am headed back up the lane, I allow myself to realize that my shoulders are relaxed into the familiar habit of swimming, my legs are giving me a fairly strong kicking, and, best of all, my head is turning in opposite-side breathing without making me dizzy.  Wow! It’s really happening.   When I make my next turn and relish the neat glide of my body, I begin to giggle out loud under water. Surfacing, I turn over to enjoy a slow backstroke, watching the ceiling tiles high above me pass and mentally noting that they aren’t making me dizzy.  Nor are the reflections in the water, the stripe moving beneath me on the floor of the pool, or the motion of my arms rhythmically moving with my stroke.

I don’t know if there’s a “swimmer’s high” like there is a “runner’s high.”  But whether there is or not, I definitely reached it that day. I had spent the past four months monitoring my motions, my diet, my energy output for anything that would trigger the swirling in my head, unsteady walk, nausea and noise in my head.  But this swim let me drop my caution and be myself. It took discipline to make myself get out of the pool after 20 minutes. “That’s enough for today.  Let’s see how you respond to this, “ I warn myself.

Smiling as I head back to the locker room, I glance back at the pool, where several more swimmers have filled the lanes.  I notice one man grinning at me with his thumb up.  Thanks, Bill, for not making a big deal of it.

This return to swimming happened in April, 2014.  I continued to be limited by Meniere’s symptoms for several more months, but I swam two or three days per week.  During a clinic in the summer at which Bill filmed us to help check our technique, I was so deaf that he had to use hand signals when I failed to pick up his directions to us  (it would be an expensive mistake to wear hearing aids in the pool).  Although I love swimming outside, I sometimes became disoriented by the dancing reflection of sunlight above and below the pool surface.  And there was no question that on my swimming days I was more fatigued.  But I was also no longer letting Meniere’s define my life.  Now, nearly a year later, I am almost symptom-free and have returned to the active lifestyle I love, and my swim workouts last longer than twenty minutes.