Nerve stimulation may help some with migraines 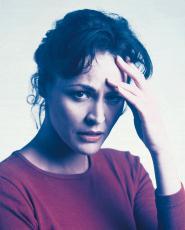 A nerve stimulator placed on the forehead may help prevent migraines among some people who get the headaches regularly - and it appears to be safe, according to a new trial.

Researchers found that people who used the stimulation devices for a short period every day over three months had fewer headaches than those who used a "sham" stimulator.

But the lead author of the study called the difference "not overwhelming."

"There's no universally effective therapy for migraine," said Dr. Joel Saper, from the Michigan Head-Pain and Neurological Institute in Ann Arbor. "Therefore, we need options, many options. There may be another option here which could be of value," Saper, who wasn't involved in the new research, told Reuters Health.

The headband-like devices used in the study, made by STX-Med, were donated by the company. In Belgium, where the trial was conducted, they run for about 300 Euros - or just over $400, said lead author Dr. Jean Schoenen, from Liege University.

According to a company representative, the device, known as Cefaly, was submitted to the U.S. Food and Drug Administration but has not yet been approved.

Schoenen and his colleagues treated 67 migraine sufferers with the electrical nerve stimulator or an identical sham stimulator for 20 minutes every day for three months.

During that time, average monthly migraines fell from seven to five among study volunteers treated with stimulation, but held steady between six and seven in the sham comparison group.

Thirty-eight percent of headache sufferers in the nerve stimulation group had their number of monthly migraines at least cut in half, compared to 12 percent of sham-treated subjects.

"The effects are clear, but modest," Schoenen told Reuters Health.

He said there are medications, such as topiramate (marketed as Topamax), that have better results than nerve stimulation - but they also come with a number of side effects.

Stimulation, on the other hand, wasn't linked to any serious side effects in the new study, published Wednesday in Neurology.

Saper said he and his colleagues use this type of nerve stimulation in their practice. The device transmits electrical signals through electrodes placed on the forehead, above the eyes, to stimulate a major facial nerve called the trigeminal.

"We have a certain number of our patients who benefit from that," he said. "But equally, a person with the same kind of headache… won't respond to it."

People in the trial were average migraine patients who got one or two headaches per week, Schoenen noted.

"There is no proof at this time that this device is also effective in people with very severe or very frequent migraine attacks," he said.

"Those migraines patients who are very disabled, they should first be treated with the more effective drug treatments," such as topiramate.

The device can be used at home while people watch television, read or do housework, Schoenen said - so using it for 20 minutes each day isn't too burdensome.

Because it won't work for everyone, he recommends migraine sufferers who are interested in trying nerve stimulation rent the device for a couple of months before buying one.