Vertigo that won't go away 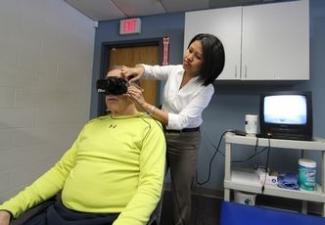 Vestibular Rehabilitation retrains ear and brain to work together.

It happened one day, instantaneously, like someone popped a switch.

As Newell Miller of Goshen was getting out of bed, he was met with nausea, no balance and a room that spun round and round. He vomited. Still, the vertigo wouldn't stop.

After first-line treatment at an urgent-care center, he returned home and did a little more research on his own. He learned about the Vestibular Disorders Center at Johns Hopkins Hospital in Baltimore, Md., where he was seen about a week later, still unable to walk.

Miller, a Vietnam vet, says he suffered left-ear hearing loss that he attributes to being near the live firing of ammunition — without using ear plugs. His hearing worsened over the years.

"But I didn't have a balance problem back then," he says.

"The vestibular system is the medical term for the inner ear," says Maristela Nevin, co-owner of Prime Care Physical Therapy in Goshen and a physical therapist who specializes in vestibular rehabilitation. "When the eyes, inner ear and legs are not working together, then an imbalance and dizziness results. Often, the brain is getting a low signal from one side and is confused."

The specialists in Maryland recommended that Miller find a physical therapist certified in vestibular rehabilitation.

"In the Hudson Valley? You're kidding me," Miller recalls thinking at that time three or four years ago.

However, he was referred to Nevin, one of a handful of those certified locally in that specialty.

"Vestibular rehabilitation helps retrain the inner ear and brain to work together," says Nevin. "A lot of people have vestibular issues, which aren't readily visible. "» You bend over and get dizzy upon straightening or after turning your head quickly "»"

Seniors can be affected more

"After an evaluation, she said, 'I think we can help you,' and she started with a series of exercises, many of which I still do two to three times a week," he says of the two- to three-times-week sessions that he attended for upward of six weeks.

Miller describes one exercise that involves moving a checkered flag — of which he says he's worn out several — right to left with specific head movements and placement of the feet. Another, while again keeping the feet placed one behind the other and with eyes closed, involves moving the head left to right while envisioning letters.

"And then she might say, 'Walk a curb,' one foot in front of the other," he says. "It causes the brain to balance "» to recondition "» almost like there was a reset button."

Treatment 'brought me back'

When Miller notices a little imbalance cropping up, he'll either return to Prime Care for a follow-up or exercise more regularly on his own.

"They work," says Miller. "I'm able to do anything anyone else can. "» I teach a spinning class and am in excellent physical condition. Mari brought me back from not getting out of bed."

Exercises and maneuvers are customized to patients and their specific conditions, says Nevin.

So what triggered the leap from hearing loss to incapacitating dizziness in Miller's case?

"The etiology is unknown," Miller says, pointing to the possibility of a virus or inner-ear inflammation.

Tumors are another cause, says Nevin, along with specific conditions such as Meniere's disease or benign paroxysmal positional vertigo, the latter of which is the most common.

In BPPV, which is diagnosed with a simple clinical test, particles in the inner ear dislodge and cause the spinning sensation when one rolls over in bed or bends.

"I can't remove the particles, but I can help them go back in place," says Nevin. "With Meniere's, there's abnormal fluid in one inner ear that can cause a spinning sensation that lasts from minutes to hours, leaving the patient incapacitated. Sometimes medications balance the fluids — and then physical therapy can help resolve any residual imbalance.

"Head trauma can also result in vestibular issues. Post-concussion, there might be headaches, dizziness or difficulty concentrating," says Nevin. "Some people recover spontaneously given enough rest, but if not, retraining is possible."

Although not part of the Bon Secours Health Charity System, Nevin is one of those to whom Nicholas D. Belasco, D.O. and founder of the Concussion Management Program within the Bon Secours Medical Group, will refer.

"New York is 10 years behind the times in terms of concussion management," says Belasco. "In the South and Midwest, big football territories, vestibular therapy is the protocol on the first day of a concussion because it might help speed up recovery."