Do figure skaters get dizzy when they spin? 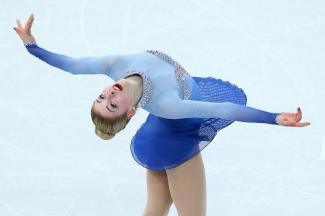 Believe it or not, elite skaters rarely feel dizzy, experts say. But skaters do have a few secrets to keep them on their feet after completing one of their spirals.

Ice dancers twizzle. A solo skater might show off an elegant camel. And for pairs, there's the eloquently named death spiral.

They're spins, and for viewers at home, it's hard to imagine how the dazzling feats, performed in quick succession, don't leave figure skaters seeing double.

So are figure skaters that good at disguising their dizziness? Or do they not feel it at all?

They do get dizzy, skating coach Mary Lynn Geldermann assures us — but only when they're just starting out.

"The first time they ever try a spin, they do get a little dizzy," said Geldermann, who coaches professional skater Samantha Cesario — a Long Island native who placed fifth at U.S. Nationals and is an alternate for Sochi. "But the more balanced they are and the more centered they are — the more trained — they don't feel the dizziness," she said.

Dancers practice a technique known as spotting, in which they pick a point to focus on as they spin — think of a ballerina whose head stays facing forward after her body starts to turn. But skaters spin too fast to do this, said Lisa Blue, director of skating for Figure Skating in Harlem.

Part of being a skilled spinner, Geldermann added, is learning to keep your feet in one spot. A 5-year-old trying her first spins might move across the ice, but an elite Olympic skater stays on her mark as she spins. This, Geldermann says, also helps control dizziness.

"If you see a dancer you'll see their head stay in the same space. Their body turns and their head follows," Blue said. "Skaters just spin all together."

But when it comes to keeping track of the number of rotations, which are needed to score at a certain level in competition, "skaters will often pick a mark on the ice to get the count," Blue said.

Coming out of a spin at top speed is also tricky, but the best skaters never wobble. "As they exit the spin, they immediately orient themselves by looking at something on the board or in the arena," Geldermann said. "But it's never really a case of dizziness."

A good spin requires skaters to have a strong core and the ability to hold a position without dropping a shoulder or a hip, which can throw off balance.

"It's basic physics, centrifugal force," Blue said. "And weirdly, you get used to it."

Novice skaters often get used to a spin, only to feel dizzy when they increase difficulty by upping the speed or the number of rotations.

"As you progress you want your kids to get dizzy again," Blue said. "A lot of people don't like that feeling. Some people do. I love that feeling!"