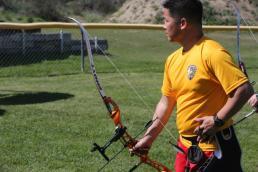 He suffers from Meniere’s Disease which causes extreme levels of vertigo, dizziness, stomach sickness, and loss of balance. McGleinnaiss, from San Francisco is now forced to change everything he’s known and embrace a whole new outlook on life as he learns to cope with his condition.

Before the Marine Corps, McGleinnaiss played professional tennis and studied law at the University of California - Berkeley. He was injured while playing tennis and soon after faced the dilemma of not knowing exactly what to do in life. He decided to join the Marine Corps, went to Officer Candidate School in 2004, and later went on to finish his law degree to become a Marine defense attorney.

It was on June 1, 2011 when McGleinnaiss experienced his first symptom of Meniere’s while speaking with a co-worker. For the next year he struggled with near-constant vertigo and dizziness, not knowing what had pulled him from his fast-paced busy lifestyle to not even being able to work most days. McGleinnaiss would be diagnosed with Meniere’s Disease more than a year later.

McGleinnaiss was assigned to the Wounded Warrior Regiment, where he learned how to cope with his illness. Marines assigned to the regiment are encouraged to become involved in various sports and activities to help them cope and aid in the healing process. Archery became his sport of choice and helped him gain an edge in his recovery.

“I started doing archery more and started to realize that it was a great benefit to me,” McGleinnaiss said. “The mental discipline of archery and calming the mind, tuning out other things, it helped develop my coping skills. I started looking at archery as not just the sport we all had to do, I looked at it as this is therapy for me.”

Upon checking into the Wounded Warrior Regiment and having to participate in a sport, McGleinnaiss had few options with his condition. With Meniere’s Disease, prolonged physical activity becomes a challenge, so a stationary sport would suit him best, a sport he has continued past his retirement. His vertigo is his only limiting factor with episodes varying from once to twice a week.

This year he is able to highlight his skills at the 2014 Marine Corps Trials, a Paralympic-style competition designed to highlight the athletic prowess of members of the regiment, veterans and international athletes with varying injuries and conditions. The Trials also provide an opportunity for all wounded, ill, or injured Marines and allied service members to further the rehabilitation of their minds, bodies, and spirits through competition and camaraderie.

Chief Petty Officer Tim Gorman, a hospital corpsman with the Wounded Warrior Regiment said many people carry through life with them burdens of their own, visible or not, whether they’re veterans, retired, active duty or even civilian. No matter how these burdens arise everyone has their own way of dealing with them. For the Marine Corps Wounded Warrior Regiment, sports play a huge role in helping disabled veterans and military members to cope with their disabilities.

Many of the domestic athletes at the trials are competing for a spot in the annual Warrior Games to be held in September at the Olympic Training Center in Colorado Springs, Colo. McGleinnaiss is participating in the Trials for the second time and has high hopes of claiming his seat in the games this year.