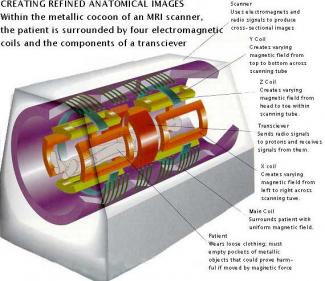 Two new studies now suggest that the strong magnets in MRI technology could be used to diagnose, treat and study inner ear disorders in the future, replacing more invasive and uncomfortable examinations.

Expanding on earlier research, Johns Hopkins researchers are reporting that people with balance disorders or dizziness traceable to an inner-ear disturbance show distinctive abnormal eye movements when the affected ear is exposed to the strong pull of an MRI’s magnetic field.

The researchers first reported in 2011 in the journal Current Biology that an MRI’s magnetic field pushes on the inner ear fluid responsible for maintaining balance, causing subjects undergoing MRI scans to have jerky eye movements and dizziness.

Two new studies now suggest that these strong magnets could be used to diagnose, treat and study inner ear disorders in the future, replacing more invasive and uncomfortable examinations.

In the first study, reported online in the journal Frontiers in Neurology, a team led by Bryan Ward, a resident in the Department of Otolaryngology-Head and Neck Surgery at the Johns Hopkins Univ. School of Medicine, placed nine patients with balance problems in an MRI machine and took video of their eye movements, without taking any MRI images.

Their earlier research had shown that healthy volunteers subjected to a 7 Tesla magnetic field — the strength of the most modern MRI machine — experienced a characteristic eye movement called nystagmus, in which the eyes repeatedly drift to one side and then jerk back.

This time, the researchers were curious whether this movement might look different in patients with inner ear problems, whose semicircular canals — the fluid-filled spaces inside the ear that are responsible for maintaining balance — would likely react differently to the MRI magnet’s pull.

While healthy, normal volunteers’ eyes moved side to side when in the MRI, with the direction of movement dependent on whether they entered the MRI tunnel head or feet first, people with “one-sided” inner ear problems displayed different eye movements that depended on which ear was affected.

Because the abnormal findings consistently showed which ear was affected in the patients, Ward says, researchers may eventually be able to use magnetic stimulation to diagnose the cause of balance disorders. Currently, people whose dizziness or imbalance is suspected to originate in the inner ear may have eye movements measured after being spun around in a chair, tilted backward on special tables, or subjected to sometimes uncomfortable ear canal irrigation with cold or warm water.

“Using magnetic stimulation, perhaps in a portable device that could fit in a doctor’s office, could offer an alternative that’s more comfortable,” Ward says.

In a second study, published in the journal PLOS One, Ward and his colleagues set out to investigate whether the inner ear balance systems of zebrafish are also influenced by magnetic stimulation. Zebrafish are a popular model for genetics and pharmaceutical studies of hearing and balance because of their surprising anatomical similarity to humans’ vestibular systems, Ward says.

If the inner ears of these fish were also affected by a strong magnet’s pull, he says, these animals could eventually be a useful tool for studying which genes are involved in inherited inner ear balance problems or which drugs could be used to treat these disorders.

To investigate, the researchers placed 30 healthy zebrafish, one at a time, into a very strong 11.7 Tesla magnetic field, using a smaller MRI machine to better accommodate the aquarium used to hold each fish.

When the aquarium was in the magnetic field, the majority of fish responded in a dramatic way akin to the vertigo and imbalance that humans with inner ear system disturbances show: the fish flipped, rolled and swam faster than normal. The fish reverted to normal swimming behavior only when their aquarium was taken out of the MRI machine and away from the magnet.

The researchers further observed that individual fish seemed to be affected by the orientation of the magnetic field, swimming preferentially either in the direction of the magnetic field or in an opposite orientation. For example, some of the animals preferred to swim north-south in a north-south field, while others preferred to swim east-west. Putting the animals into an opposing field didn’t affect their preference. These results could add insight into the scientific field of magnetosensation, which studies how some animals are able to sense the Earth’s magnetic field and use it for purposes such as migration, Ward says.

Overall, he adds, the findings in humans and fish could eventually lead to useful ways to harness the effect of an MRI magnet on the inner ear.

“We may someday have some practical applications for this anatomical oddity,” Ward says.