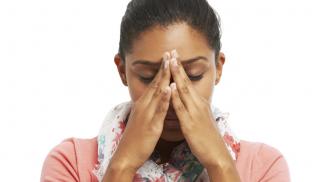 Stroke symptoms can be so tricky to spot that sometimes, even emergency room doctors get it wrong.

A study from Johns Hopkins University suggests that ER doctors may be up to 30 percent more likely to overlook signs of stroke in women and minorities. And for patients under 45, the odds are much greater than for those who are older.

"Younger people are less likely to have a stroke, but when they have that stroke, they're much more likely to be missed," says Dr. David Newman-Toker, a neurologist at Johns Hopkins and the study's lead author.

Using federal health care data from 2008 to 2009, Newman-Toker and his colleagues tracked the discharge records and emergency visits of nearly 200,000 stroke patients in more than 1,000 hospitals.

Nearly 13 percent of people admitted to the hospital with a stroke diagnosis had visited the emergency room up to 30 days earlier with complaints of headaches and dizziness, which Newman-Toker says may have indicated that they either were having a stroke with atypical symptoms or were having a minor attack that acted as a precursor to a more severe stroke.

But during the initial visit, these patients either were diagnosed with benign conditions like inner ear infection or migraine, or were sent home with no diagnosis at all. Roughly a quarter of these patients returned less than 48 hours later in the midst of an obvious stroke, according to results published Thursday in the journal Diagnosis.

Though the study doesn't say why misdiagnoses seem more likely to occur in women, minorities and younger people, Newman-Toker says the reasons could range from language and cultural barriers to the typical belief that stroke only happens to older folks.

Since stroke accounts for only one of every 20 cases of dizziness, physicians may not think of stroke as a probable cause unless the patient is elderly. "When a 25-year-old or a 35-year-old comes in with dizziness, they're not going to think of stroke because it's generally not a disease of the young," he says. And women are less likely than men to exhibit the classic, more familiar symptoms of speech difficulty or weakness in one arm.

Without clinical details about each case, however, it's too early to firmly say that the majority of these patients were misdiagnosed, says Dr. Larry Goldstein, a neurologist and the director of the Duke Comprehensive Stroke Center, who wasn't involved in the study.

"There's no evidence from this paper that those in fact did have stroke earlier on," he says, adding that headaches and dizziness aren't necessarily signs of an attack.

Newman-Toker agrees that only three to five percent of ER patients with dizziness actually have a stroke. But though the study doesn't definitively say every case was a misdiagnosis, he says the correlation between the early symptoms and a subsequent stroke is too strong to be passed off as mere coincidence.

Both neurologists agree that stroke misdiagnosis is a real problem.

In fact, misdiagnosis in general accounts for an estimated 40,000 to 80,000 preventable deaths each year, costing hospitals nearly $400,000 per claim, according to a recent analysis published in BMJ Quality and Safety.

Based on this latest study, Newman-Toker and his colleagues estimate that somewhere between 15,000 and 165,000 stroke cases are misdiagnosed each year. It's no longer enough to base diagnosis on demographics and risk factors, Newman-Toker says, especially since research shows that early treatment improves stroke outcomes and can lower the risk of having another one by as much as 80 percent.