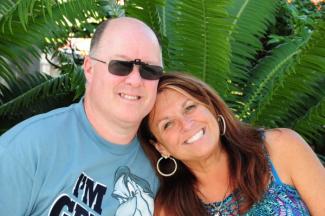 In August 2013, 52-year-old David suffered a sudden onset of vertigo that later led doctors to discover that he had suffered a stroke. David is launching a vestibular support group for people with symptoms similar to his.

When 52-year old Dedham resident David Morrill experienced a sudden onset of dizziness last August, his family took him to the hospital.

“I got up from the dinner table and felt like the room was spinning,” said David. “I was nauseated and had trouble walking, so my family took me to the emergency room.”

According to David, he was diagnosed with vertigo, an inner ear condition that causes dizziness. He said the doctor prescribed Meclizine, often used to treat dizziness, and told him his condition should improve within a few days.

“I went back to the emergency room about 48 hours later by ambulance,” said David. “I was having a lot of dizziness and couldn’t walk at all. I had trouble remembering things.”

The doctors ordered an MRI, which, David said, revealed a large blood clot on the brain stem. He was diagnosed with a stroke.

“The type of stroke that I experienced was rare,” said David. “I encourage anyone with sudden dizziness to get checked to see if something more serious is taking place in their body.”

After he was diagnosed, David spent two weeks in the hospital’s stroke unit and two more weeks on the rehabilitation unit. He was then discharged, and his wife transported him to outpatient therapy several times each week. His job was terminated after six weeks, along with his health insurance.

A family friend, who is a therapist, continued his therapy at no charge.

“The community was also very supportive and built ramps for me in the house,” said David. “I had to learn to walk again.”

Doctors later discovered a hole between the chambers of David’s heart, a diagnosis known as Patent Foramen Ovale (PFO), which he thinks contributed to his stroke. He said surgery to repair the hole was not recommended at the time because of risks involved.

David is currently disabled. He hopes to return to work one day, but still suffers from constant dizziness. He said his wife goes everywhere with him.

“My wife, Cheryl, has been my rock and my support through all of this,” said David. “She’s been with me every step of the way.”

David initially battled bitterness after the stroke. Rather than allowing bitterness to control his life, however, he decided to use his experience to help others.

“It’s time for me to give back to the community,” David said. “It’s therapy for me.”

The group will meet at 6 p.m. Wednesday, May 7, at Brewer Physical Therapy and Spine Clinic, 51 Main Road, Holden. The purpose of the group will be to teach coping skills for everyday life and to provide education regarding medical options.

“I hope to have doctors or therapists as speakers in the future,” said David.

For information about the group, email David at [email protected] or call 385-5605.