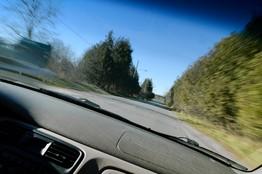 Researchers from the Navy, the National Aeronautics and Space Administration and academia are studying causes and potential treatments of motion sickness, hoping to formulate better products for situations that range from the extreme (space!) to the mundane (road trip to Grandma's, anyone?).

There's nothing quite like motion sickness to ruin summer travel, with symptoms including dizziness, headache, nausea and most unfortunately, vomiting. Some 25% to 40% of the population suffers from some degree of motion sickness, depending on the mode of transportation.

At Siena College, in Loudonville, N.Y., researchers have studied the effectiveness of ginger capsules, facial cooling and listening to music as a distraction for lessening symptoms and physiological responses to motion sickness.

NASA and the Navy are collaborating with pharmaceutical company Epiomed Therapeutics, of Irvine, Calif., to develop a nasal spray containing scopolamine, a drug currently used in a prescription-only patch for those prone to seasickness. Researchers say the drug's strong possible side effects, such as drowsiness and dry mouth, would be significantly reduced with a nasal spray.

Part of the difficulty with devising treatments is that experts don't know exactly what causes motion sickness. The prevailing belief is it is caused by a sensory mismatch between the visual and vestibular systems. The vestibular system, which is part of the inner ear, monitors movement and helps control balance.

In other words, our inner ear tells our brain that we are moving, but our eyes tell us we aren't, or vice versa. "When one of these is telling you you're in motion and the other one is telling you you're sitting, the brain gets confused with the mixed signals, and it causes this sense of sickness," says Abinash Virk, director of the travel and tropical medicine clinic at Mayo Clinic in Rochester, Minn.

What remain unknown are the reasons why the mismatch causes some individuals to react adversely. One long-standing theory is that the reactions are triggered by the brain's false identification of a toxin in the body, with nausea and vomiting a protective response to get rid of it.

Another theory is that body sway, or the change in a person's movements over short time intervals, can explain a propensity to get motion sickness. In Tom Stoffregen's lab at the University of Minnesota, the kinesiology professor measures each subject's body sway over a short period. He has found that individuals who are more susceptible have a more-erratic sway during and even before they are exposed to any stimulation.

Dr. Stoffregen uses a force plate, a glorified bathroom scale with pressure sensors, to take measurements of body movement as often as 200 times a second. He studies people both in a lab simulator and on ships.

In a forthcoming study to be published in the online journal PLOS ONE, Dr. Stoffregen tested the body sway of 35 cruise passengers aboard a ship in the Caribbean before departure. Passengers then reported the intensity of their seasickness. He found a link: Those who reported getting more sea sickness had more body sway at the dock.

"There may be sort of a general classification that people who are susceptible to motion sickness have," Dr. Stoffregen said. "Maybe they just move differently in general."

Max Levine, an associate professor of psychology at Siena College, studies behavioral and alternative motion-sickness treatments. In a recent experiment on about 50 individuals, half received capsules with ginger root and the remainder got a placebo. Then the individuals were seated in a chamber and exposed to a rotating device called an optokinetic drum that induces motion sickness.

"The folks who got ginger beforehand ended up doing much better both in terms of the symptoms they developed and in terms of the physiological reaction that they had in the stomach," he said.

Recent behavioral experiments have found that cool compresses or gel packs placed on the forehead are somewhat effective at controlling physiological changes, such as abnormal rhythmic stomach activity that generally accompanies nausea, but didn't significantly reduce nausea. Listening to one's favorite music as a distraction showed improvements in symptoms including nausea, as well as in physiological changes, Dr. Levine said. Now, Dr. Levine is studying how deep breathing and relaxation may aid in motion sickness.

Doctors say a common misperception is that traveling on an empty stomach helps. Wrong. It's better to eat a light meal beforehand, especially one high in protein.

In a 2004 study in Alimentary Pharmacology & Therapeutics, 18 individuals completed three trials. In one, they had a protein drink before exposure to a device that induces motion sickness. In a second trial, they had a carbohydrate drink, and the third time they had nothing. They fared best after the protein drink. Protein "really tends to get the stomach into that slow normal rhythmic activity more so than fats and carbohydrates," Dr. Levine said.

Children over age 2 seem more prone to motion sickness than adults. Some experts think children's extra-sharp senses may make them aware of even a slight mismatch. Adults in their golden years seem to experience motion sickness less often—perhaps because of habituation.

Doctors say prescription drugs and over-the-counter options like Dramamine are the best treatment option, though some can cause side effects. Such drugs work by suppressing the central nervous system's response to nausea-producing stimuli. They reduce symptoms for many people but aren't universally effective.

Some travelers rely on homeopathic remedies such as ginger or acupressure wrist bands. Sujana Chandrasekhar, director of New York Otology in New York City, said they aren't universally effective, but are "worth trying."

There are behavioral tips for preventing or minimizing symptoms. Cynthia Ryan knows them all. The 45-year-old Portland, Ore., resident has suffered from motion sickness since she was a child commuting to school along winding roads, her barf bag in hand. Now the executive director of the Vestibular Disorders Association, Ms. Ryan says individuals with vestibular disorders are prone to motion sickness.

Her rule of thumb is to always be the driver. "I almost never let somebody else drive," she said. "And if I do, I sit in the passenger seat." Even when sitting as the front passenger, Ms. Ryan says she does deep-breathing exercises and tries to focus on a fixed point on the road in front of her. "I can't participate in conversations," she said. "I can't read. Sometimes someone will pass me a smartphone and say, 'Can you read me the directions?' And I'll say, 'Not unless you want me to throw up in your car.' "

Watching television TV or reading in a car is a no-no. "Face forward in the vehicle to be as alert to what's happening outside the vehicle as the driver would be," Dr. Chandrasekhar said. "You want to try to match your eyes to what's going on and to what your inner ear is feeling." experts say: Just close your eyes and sleep.

A version of this article appeared June 18, 2013, on page D1 in the U.S. edition of The Wall Street Journal, with the headline: New Views of Motion Sickness.