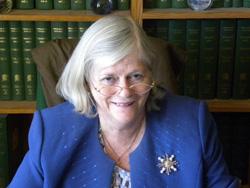 In the UK, the Ménière’s Society will be inviting health professionals, Society members and the general public to participate in this year’s Balance Awareness Week.

There will also be a social media campaign on Twitter and Facebook to spread the word about vestibular disorders and get people talking.

Vestibular disorders include conditions such as Ménière’s disease, labyrinthitis, migraine associated vertigo and Benign Paroxysmal Positional Vertigo (BPPV); all of which can affect a sufferers work and home life.

One previous sufferer is Ann Widdecombe, the former high profile Conservative politician and novelist suffered from viral labyrinthitis.  Ann recalls how horrendous the first few weeks were, ‘when I tried to walk I felt as if I was swimming. I had to hold on to something whenever I walked.’

Despite this, Ann’s GP advised her to keep moving.  As with most vestibular disorders, Ann had to learn to balance again; re-mastering the previously simple tasks of walking up the stairs.

Ann is adamant that the best advice she was given was from her doctor; which, was to keep active and try to carry on as normal, ‘once you have a confirmed diagnosis of labyrinthitis and you know it is nothing more serious, keep active and get on with your life, bed rest is no good’.

abyrinthitis is when the inner ear, called the labyrinth becomes inflamed. Viral labyrinthitis often follows common illnesses such as a cold or flu; usually causing a sudden, violent onset of vertigo, nausea/vomiting as well as sudden hearing loss.

Acute episodes usually end after one or two months. Vestibular rehabilitation exercises are sometimes recommended for patients to help with any residual imbalance.

Natasha Harrington Benton, Director of the Ménière’s Society, ‘We want to defeat dizziness; that means we want to help people recognise the signs of vestibular disorders and urge them to seek help from their health professional.

We also want to support sufferers by giving them the information and support to manage their condition. ’

This year the Ménière’s Society is delighted to be partnering with the U.S Vestibular Disorders Association (VeDA) and Ménière’s Australia, to raise awareness of vestibular disorders globally.

If you would like further information on Balance Awareness Week or vestibular disorders please visit www.menieres.org.uk or email [email protected]