New test detects concussion impairments that may be overlooked 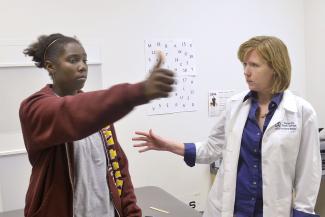 Researchers at UPMC and the University of Pittsburgh have developed a simple new test that can detect symptoms of a concussion current tests often miss.

The new test concerns the vestibular ocular system, which is responsible for integrating vision, balance and movement. It’s what allows us to keep our eyes focused and stable when we move our head around. It’s located in the vestibulum of the inner ear.

But existing tests, which focus on balance, often miss these symptoms, said Anne Mucha, clinical coordinator for vestibular therapy. So a research team she headed – which included University of Pittsburgh experts in other disciplines -- set out to develop a test that would pick them up.

The test they designed – called vestibular/ocular motor screening – allows clinicians to be 90 percent accurate in identifying patients with a concussion, she and other researchers said in an article published online in the American Journal of Sports Medicine. The test can be added to current assessment methods such as physical examination, symptom evaluation and computerized neurocognitive testing.

“We were already good at detecting concussions,” Ms. Mucha said. “VOMS can tell us what type of a concussion a patient has suffered.”

There are six types, identified by the symptoms they exhibit: vestibular (balance issues); ocular (vision problems); mood and anxiety, migraine headaches, and cervical (problems with the neck).

Most concussion sufferers exhibit several of these symptoms, but one or two tend to predominate, Ms. Mucha said.

About 80 percent of people who suffer concussions recover in about three weeks. But it can take months for the remaining 20 percent to recover.

Most of the patients treated by the Sports Medicine Concussion Program who’ve taken months to recover have had vestibular or ocular issues, Ms. Mucha said.

To develop VOMS, researchers studied 64 concussed patients approximately five days after they suffered their injuries, and compared their responses to a control group of 78 healthy patients.

The VOMS test assesses five areas of the vestibular ocular system: smooth pursuits (eyes following a moving object), saccades (rapid eye movement), horizontal vestibular ocular reflex (that stabilizes images during head movement), visual motion sensitivity (related to dizziness), and near-point-of-convergence distance (where eyes can hold together without double vision). The test takes no more than five to 10 minutes, can be administered with just a tape measure and a metronome.

After each test, such as asking the patient to focus on an object, or to move his or her head rapidly from side to side, the clinician administering the tests asks the patient if he or she is exhibiting any of the key symptoms, so feedback is immediate.

After taking the VOMS test, more than 60 percent of patients exhibited symptoms of concussion, said Anthony Kontos, assistant research director for the Sports Medicine Concussion Program and a member of the research team. If it weren’t for VOMS, their impairments might have been missed, he said.

The addition of VOMS to the “diagnostic tool kit” of other tests, such as those pioneered by the UPMC Sports Medicine Concussion Program which measure neurocognitive deficiencies, “could very well foster a paradigm shift” in the diagnosis and treatment of concussions, Mr. Collins said.

Although Mr. Collins and Ms. Mucha would not get more specific, it was plain both were excited by the possibilities VOMS offers.

If those with vestibular and ocular concussions can be identified immediately, the time it takes to treat their concussions could be cut “very, very substantially,” Ms. Mucha said.