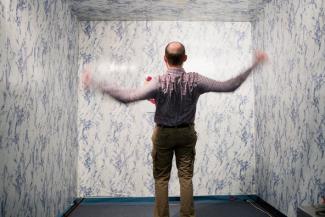 In a cavernous basement laboratory at the University of Minnesota, Thomas Stoffregen thrusts another unwitting study subject — well, me — into the “moving room.” The chamber has a concrete floor and three walls covered in faux marble. As I stand in the middle, on a pressure sensitive sensor about the size of a bathroom scale, the walls lurch inward by about a foot, a motion so disturbing that I throw up my arms and stumble backward. Indeed, the demonstration usually throws adults completely off balance.

I’m getting off lightly. Dr. Stoffregen, a professor of kinesiology, uses the apparatus to study motion sickness, and often subjects must stand and endure subtle computer-driven oscillations in the walls until they are dizzy and swaying. Dr. Stoffregen’s research has also taken him on cruises — cruise ships are to motion sickness what hospitals are to pneumonia.

“No one’s ever vomited in our lab,” he said. “But our cruises are a different story.”

For decades now, Dr. Stoffregen, 56, director of the university’s Affordance Perception-Action Laboratory, has been amassing evidence in support of a surprising theory about the causes of motion sickness. The problem does not arise in the inner ear, he believes, but rather in a disturbance in the body’s system for maintaining posture. The idea, once largely ignored, is beginning to gain grudging recognition.

Motion sickness is probably a problem as old as passive transportation. The word “nausea” derives from the Greek for “boat,” but the well-known symptoms arise from a variety of stimuli: lurching on the back of a camel, say, or riding the Tilt-a-Whirl at a fair. “Pandemonium,” the perpetually seasick Charles Darwin called it.

No definitive explanation for it exists. In 1977, Dr. Michel Treisman, a psychologist at the University of Oxford proposed that motion sickness may have evolved as a way to cope with food poisoning. If taste or the gut’s chemosensory system fail to detect a toxin in a meal, he said, then perhaps the dizziness, loss of coordination, and vomiting exist as a fallback system.

Whatever its origins, Dr. Stoffregen said motion sickness may worsen with the proliferation of digital devices and displays. We travel turbulent skies; we bury our noses in smartphones, play video games on moving buses. Anecdotal reports suggest that Google Glass and Apple’s latest software update, iOS7, can induce motion sickness. Dr. Stoffregen has published research on young adults who get queasy, or not, in front of an Xbox or PlayStation.

Despite its prevalence, Charles M. Oman, the director of the Man Vehicle Lab at M.I.T., said, “There has been relatively little research on nausea, vomiting and motion sickness in the modern era. Most of the research is 30 or 50 years old.”

Dr. Oman believes neuroscience may confirm the traditional explanation, known as the sensory conflict theory, which holds that motion sickness arises because of a conflict in the inner ear when the perception of movement in the brain doesn’t match stored patterns.

It’s generally accepted that a functioning vestibular system is a prerequisite for motion sickness: An unlikely study published in 1968, for example, found that deaf participants did not experience seasickness on a narrow, wooden boat in 40-foot swells off the shore of Nova Scotia.

Dr. Stoffregen rejects the theory, which, he says, fails to explain why women are more prone to motion sickness than men or why it’s harder to stomach being a passenger than a driver. He argues that humans become nauseated in situations where they have not yet learned strategies effective in maintaining a stable posture.

The body has a subtle, natural wobble, or “postural sway.” In one study, he found that the more a video game player’s head swayed, the more likely he was afterward to experience symptoms of motion sickness. In another small study, pregnant women who experienced morning sickness also exhibited more swaying.

A boxer’s postural sway before a bout can predict whether he will feel sick after a few punches to the head, Dr. Stoffregen has reported. Similarly, undergrads prone to seasickness showed more body sway on dry land before embarking on a semester at sea. Widening one’s stance reduced the swaying and the risk of motion sickness.

Simply put, Dr. Stoffregen believes new movement patterns must be learned, and until they are, the body’s posture-maintenance system rebels — along with the stomach. Some people adapt more quickly.

Still, like the common cold, there may be no single explanation for motion sickness. Neither he nor anyone else has explained why there should be any subjective consequences to getting in a car, or why we maintain a lifelong talent for riding a bicycle while even experienced sailors struggle at sea after months on land.

Current treatments for motion sickness do little more than induce drowsiness, Dr. Stoffregen said. On a recent cruise, the crew spent two days wondering where he’d disappeared to. He was in his room, another scientist laid low by the very thing he studies. He refuses to take Dramamine or any of the countless alternative treatments.

“I know they don’t work for me. Not even as a placebo.”