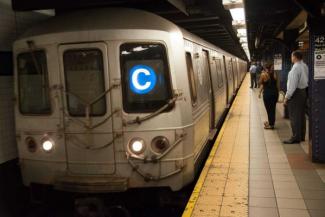 New Yorkers are resigned to a life of noise, particularly while riding through the city's 109-year-old subway system.

But the heavy machinery and train cars that create a metal-on-metal cacophony can be harmful to your ears, experts say.

"What you're essentially doing is stressing out your ears," said Dr. Chris Herget, an audiologist who practices at New York City Hearing and Balance in midtown.

This past Monday, amNewYork joined Herget at several Manhattan stations to find out exactly how loud the subway system can get.

Trains barreling into transit hubs like Times Square and smaller stations ranged from 92 decibels to 102 decibels, according to a sound-measuring device. That's a noise level people can be exposed to for up to 15 minutes without damaging their hearing. And even though trains can enter and leave stations quickly, repeatedly being exposed to that level of sound from a platform can, over time, contribute to hearing issues such as tinnitus, the ringing in one's ear, Herget said.

"You're not going to get hearing damage immediately," he said. "It's going to be a process of possible years and decades."

Herget said riders can use ear plugs, likening them to wearing sunglasses at the beach. But he lamented that few people like to wear them. "It's a shame hearing protection isn't as fashionable as sunglasses," Herget said.

The measurements were consistent with a comprehensive 2009 study into transit noise in the American Journal of Public Health. The study concluded that "given sufficiently long exposure durations, noise levels associated with mass transit are high enough to produce . . . [hearing loss] in riders."

"Even those short bursts [of train noise] are potentially dangerous," said Dr. Robyn Gershon, a former Columbia University professor who supervised the study.

The MTA has been trying to quiet its noisy subway system since the mid-1970s, including lubricating tracks on sharp curves, using quieter train wheels and installing composite brake shoes on all subway cars to stop wheels from screeching, agency spokesman Kevin Ortiz said.

For MTA workers, the agency requires an annual hearing test and hearing protection for employees exposed to at least 85 decibels over an eight-hour shift.

Tom Carrano, director of subway safety at the Transport Workers Union Local 100, said the union pushes for ways to quiet the workplace by using newer machines or relocating a noisy piece of equipment away from workers. Still, he noted that decades of noise exposure has taken its toll. "We have guys that retire and they're legally deaf," Carrano said.

But riders said the noise is just a fact of life in New York City, even if it can be annoying.

"The decibels have got to be a lot higher than we're accustomed to hearing," Larry Parent of Staten Island said while waiting in Union Square, a station notorious for screeching No. 4, 5 and 6 trains. "I'm not the only one holding their ears."