Tinnitus: the ringing that has no answer 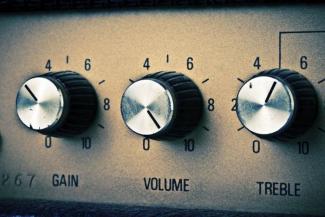 It can be difficult to get inside the experience of someone else, to see what they see, hear what they hear and feel another person's pain. RN producer Maria Tickle takes you inside her head and into the world of a person with tinnitus.

Lying on a trolley before surgery to remove a benign brain tumour, I knew that when I woke up my left ear would be strictly ornamental. The safest way to remove the tumour was through my ear, leaving me deaf on that side. I'd prepared myself for this and lay there wondering what it would be like to wake up and hear nothing in that ear.

What I hadn't been prepared for was that I would never, ever know silence again. I came to in recovery with an unrelenting hiss and metallic whine in my head. It is now the soundtrack of my life. I have tinnitus.

It doesn’t matter what you do or what your status is in life, when tinnitus hits you, it can hit you really hard.

ROSS MCKEOWN, PRESIDENT OF THE TINNITUS ASSOCIATION OF VICTORIA

It's tough to live with, so I set out to find out much as I could about it, and learn how other people cope with it. Ross McKeown is president of the Tinnitus Association of Victoria and over the past two decades he and his colleague have counselled around 10,000 people.

McKeown says that some of the most common ones are ringing, whooshing, hissing, and also mechanical sounds like pneumatic drills and machinery. He developed tinnitus nearly 25 years ago as a permanent side effect of heavy doses of an anti-inflammatory drug he was prescribed for arthritis.

What does his sound like? 'If you could imagine sitting under a tree with cicadas in full flight, very similar to that.'

‘I was a school principal and I just couldn't cope and was forced into premature retirement. The next few years were just horrendous, I couldn't imagine that I could live like this for the rest of my life.'

McKeown takes many phone calls each week from people in the early stages of tinnitus, through the help line his association runs.

'It doesn’t matter what you do or what your status is in life, when tinnitus hits you, it can hit you really hard. Many of them are suicidal. I don't want to overdramatise it, but thoughts of suicide are very common in the early stages with tinnitus.'

Listen: The sounds of Tinnitus

He says it's very hard for those who don't have the condition to understand what these people are going through.

'[Early stage sufferers] always want to know if you are experiencing it, because they've spoken to family and friends and tried to explain it and just get blank looks. So they know that if you haven't got it you don't understand. The thing is, it's there all the time. It's all very nice saying, "Oh just don't listen to it,” it's not that simple.'

Although the prevalence of distressing tinnitus in the general population is around six per cent, as you can see from the list above, among professional musicians the rate is estimated to be much higher—around 50 per cent. Broadcaster and former Skyhooks guitarist Red Symons describes his as sibilant white noise.

'I've sold my ears for evil over the years,’ he says. ‘I started when I was in my twenties with loud music in bands, but all the way through I've been involved in the production of music at various stages, and in order to hear clearly you have to turn it up really loud. It takes its toll.'

For Symons, the hissing and zinging in his head means he has to lip read his way through some conversations. 'Amongst my friends and the people I work with we all speak REALLY LOUD because we've all got a bit of it.'

'It really bothers some people, it doesn't bother me.'

Although Symons is able to live with tinnitus relatively easily, others struggle terribly, sometimes for many years. What makes the difference? McKeown says personality is a major factor.

'If you are fairly relaxed and laid back you tend to get on top of your tinnitus fairly quickly. If you're a worrier, if you obsess about it, then those people are very, very hard to help. The other people who are very hard to help with tinnitus are those who had pre-existing depression and anxiety, because they begin to blame the tinnitus on their depression, when it actually preceded the tinnitus.'

Just what is it, though, that's causing these noises in my head? Understanding that is the first step towards habituation, and habituation is the holy grail for tinnitus sufferers. You still hear the noise, but only notice it sometimes and it no longer drives you mad.

'Tinnitus is the noise of your auditory system,’ says Ross Dineen, an audiologist and tinnitus researcher who has also lived with horrible head noises for many years. ‘I suppose the best analogy is that it's like a record player without a record on; if you crank up the gain of the amplifier you get the noise of the amplifying circuit.'

Related: ANAM is teaching classical musicians to look after their bodies

Tinnitus can occur if your hearing changes, from noise exposure, infection or through acquired hearing conditions such as nerve deafness.

'The brain starts to turn up the activity of part of the auditory system to try and improve the quality of discriminative information coming into the brain,’ says Dineen. ‘Because it's the brain doing all the work, your ears are really just a microphone.'

There are all sorts of tinnitus treatments available. You can take pills and potions or try neuromonics, sound therapy or tinnitus retraining therapy. However, according to The Cochrane Reviews, which provides a meta-analysis of research, they work inconsistently at best and sometimes not at all. It's also hard to tell which successes are due simply to ‘the intervention effect’: when being heard by a medical professional makes patients feel more at ease.

It’s possible that many patients who have had success with therapies would have become habituated even if they had done nothing. Counselling, however, does seem to help tinnitus sufferers, particularly in the early stages of adaptation.

For McKeown, learning how to manage his condition has made all the difference. He says there are four key steps: 'The first one is you have to overcome all your fears and worries about the sound you're hearing in your head.'

'Step two is you start to change your perception of the sound, and start to treat it like traffic noise rather than something that is a threat to your well being.'

The third step is to understand the importance of focus. 'I would have been having coffee with friends, and I'd say to myself, "that's interesting, an hour and a half and I've not heard you. You've been screaming all that time but I haven't listened to you." I began to understand that the brain at a subconscious level was going to switch away whenever I was doing or thinking something more important than the tinnitus.'

‘People who do give up the things that they love, all they're doing is spending more time at home sitting in the quiet listening to their tinnitus and becoming more distressed.'

There are also a few practical things you can do to help quieten down that noisy head. Ian O'Brien is an audiologist and French horn player with the Queensland Symphony Orchestra. His very loud instrument is the cause of his tinnitus.

Although tinnitus may sound very loud in your head, especially during a spike caused by coffee or wine, Dineen says it's actually a relatively low intensity signal and has a lot more to do with your attentional system and stress hormones.

'As your stress hormone levels go up you start to monitor your environment a lot more obsessively,’ he says. ‘So you become more sensitive to light and to movement and to sound in preparation for fleeing or fighting from whatever stress environment that you're in.'

Head to The Body Sphere to listen to the full episode and join the discussion.

However, it's a vicious cycle because the more annoying your tinnitus, the greater your stress levels.

As for not developing the condition in the first place, Dineen says healthy ear management can help.

'Your ear will produce tinnitus as a warning sound, if you've been out to a party, or using an iPod, and after you're aware of ringing in your ears. The critical issue is how loud the sound is and how long you've been listening to it. If you ignore that and continue to expose yourself to those levels of sound, then you are going to injure your auditory system and you could end up with permanent tinnitus.'

While tinnitus may be avoidable for some people, for others there's no identifiable cause. It can also be a side-effect of a drug treatment like chemotherapy. In my case, it was the price I paid for my life.

It's taken 18 months, but like others I've spoken to, I've finally reached the holy grail of habituation. Understanding tinnitus has been integral to that. I'm no longer a tinnitus sufferer; I'm just a person with tinnitus.

For help or information call Lifeline on 131 114, or visit beyondblue.org.au.