Former Loyola Athlete Had to 'Retrain Her Brain' After Multiple Concussions 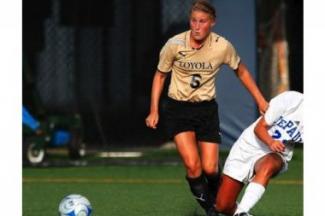 Former Loyola University Chicago women's soccer player Allie Roufus headed a goalie's "sky-high" punt at Montrose Beach one day last summer — and within a week of her head colliding with the soccer ball she knew something was wrong.

She found herself suffering intense headaches, dizziness and splotched vision, and woke some days in what she called a disoriented "fog."

The first doctor she visited the week after the recreational game thought she was suffering from "tension headaches."

By February 2013, however, things had gotten much worse. Roufus could barely finish basic household chores. Dizzy spells that struck while she drove her car forced her to pull over and gather herself.

"It was like everything was spinning around me and I couldn't control things," said Roufus, 24, who works in marketing in suburban Libertyville.

A friend, thinking Roufus was suffering from Vertigo, referred her to Athletico Physical Therapy in Andersonville, where she explained her symptoms to specialist Jennifer Curry. In April, she underwent an array of eye movement and balance tests.

The damage, Curry suspected, stemmed from multiple concussions Roufus said she suffered throughout her career at Loyola, from 2007-2010.

"Likely what happened is she suffered a concussion with [the header], and with any type of trauma to the head you can be at risk for damage to your vestibular system," said Curry, 27. "Probably, from the trauma of the header and her previous history of multiple concussions, she ended up with vestibular loss."

The vestibular system "includes the parts of the inner ear and brain that process the sensory information involved with controlling balance and eye movements," according to the Vestibular Disorders Association.

Curry, who has been a personal trainer at Athletico for two years, referred Roufus to a neurologist, who determined Roufus' vestibular system had suffered significant damage and sent her back to Athletico. Roufus started vestibular therapy with Curry and they got to work in April.

Curry aimed to hone Roufus' balance and "retrain her brain." One exercise had Roufus balance on a medicine ball that was flat on top but rounded on the bottom while she watched Curry move a card from left to right.

Roufus said she had her first concussion during a game in her freshman year at Loyola, where the 5-foot-6 defender walked on to a spot on the soccer team but ended up starting most her career.

"I kind of just broke my whole face," Roufus said.

She also had concussions in her sophomore and junior years.

By senior year, Roufus said, "whenever I was doing a header I would have a little bit of a headache, but I just kept playing because that's my passion, and that's what I was there to do."

She holds no grudges against Loyola: "I understood the risks involved with playing collegiate soccer and that was my passion. It was my personal choice to play soccer."

By June, after a few months of therapy at Athletico, Roufus' vestibular function had progressed significantly, so Curry gave her eyesight and balance exercises and a plan for "getting back to driving," Curry said.

Roufus said she is now able to drive on side streets on her own, and she still keeps in contact with Curry for support and advice as she continues her recovery path.

Roufus, who had lived in Uptown at the time of the concussion, moved back home with her parents in Milwaukee, Wis., at the end of August, she said, because "It was easier to live up there and practice my driving."

She started out with "baby steps," first practicing driving short distances with her mom or dad riding shotgun, she said. Then she tried longer distances, and weaned herself off having someone supervise her inside her car by following a vehicle driven by her parents.

While she takes a 15-minute drive without any help to a friend's house and is driven down to Libertyville for work, she said, however, "the highway is my big fear."

One day in August, Roufus was at the wheel of her car on a highway headed toward Libertyville with her mother Amy Roufus, 50, at the passenger side when she entered a construction zone and four lanes of traffic suddenly became two lanes.

She "got very quiet" and said ”I think I'm going to pass out," remembers her mother, who watched panic and anxiety set in amid her daughter's dizzy spell.

"You're not going to pass out," Amy Roufus said, encouraging her daughter to "just make it to the next exit."

The daughter said she couldn't.

The frightened mother said to at least slow down, but the disoriented Roufus "floored it."

"I thought: 'This is it. I'm dying — right now,'" her mother remembers. "We were going 75-plus miles an hour through this construction zone, in morning traffic."

The daughter was eventually able to gather her wits, pull over and park "and was just sitting and sweating" in the driver's seat, her mother said.

She has stopped driving on the highway, she said.