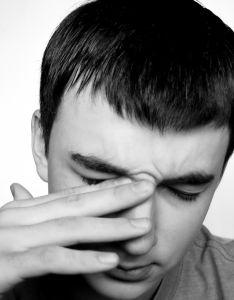 Neuroscientist Uzma Samadani, MD, began her TEDMED 2014 talk by holding out her index finger and moving her arm back and forth laterally.

"That’s right," she said. "Follow my finger. This is the current state-of-the-art diagnostic for head injury."

Every 8 seconds in the United States, someone gets a serious blow to the head from a fall, accident, or collision, she said. "We can't tell how badly they're hurt. Sometimes we can't even tell if they're hurt at all."

The best technologies — CT and MRI — generally don't detect concussion. The brain may appear normal even when it's not functioning normally.

And even if a physician knows there's a brain injury, it's hard to tell whether the injury is getting better over time.

Starting with the theory that less severely injured patients would be able to watch television, whereas those more severely injured would stare into space, Dr. Samadani and her colleagues wrote software to track people's pupils as they follow action on a screen.

They then compared eye movement of people with brain injuries and eye movement from a healthy control group, tracking whether people's eyes were able to stick with a focal point as it moved. If an eye lagged behind another for even a fraction of a second, the software detected it.

The results showed a clear difference in the eye function of a healthy person and one with a brain injury.

"In many patients, eye movement abnormalities actually revealed where in the brain the injury might have occurred," said Dr. Samadani. "I was in absolute shock. If this meant what I thought it did, we might finally have a way to detect and quantitate the severity of brain injury."

Statisticians confirmed a clear statistical difference between the healthy and brain-injured groups. These results led Dr. Samadani to found a neurodiagnostic company, Oculogica.

The company loaned the technology, called EyeBox, to the Children's Hospital of Philadelphia (CHOP) concussion center.

"We saw, sadly enough, that concussion in children results in just as severe eye movement abnormalities as it does in adults," said Dr. Samadani.

"We feel this is a huge issue in pediatrics, because the primary work of children is school," which is heavily dependent on visual processing. A concussion can make eye movement a chore, when it should be effortless, she said.

Last year, she saw 3000 kids for concussion and said she has seen a jump in the numbers in the past 5 years. Most of the kids have eye-tracking problems, Dr. Master and her colleagues found.

With the technology, however, they are able to tease out data on normal scores vs abnormal scores for balance and visual issues, and help children, families, and schools to compensate for deficits.

Prototypes are up in 3 locations at New York University, and a system is being set up in Fort Campbell, Kentucky, home of the US Army's 101st Airborne Division, for use in blast injuries, Dr. Samadani told Medscape Medical News.

The system could also be useful in a sports locker room, she said, and results could be available in 3.5 minutes. "We could probably make it less, we just like to have multiple repetitions," she explained.

The technology is noninvasive, giving it an advantage over testing spinal fluid and blood, and it eliminates the variation possible when a clinician does a physical exam.

The system is ready for submission to the US Food and Drug Administration, she said, and others will have to replicate her findings.

"For doctors who treat brain injury, this might be a quantum leap," she said. "We don't have to guess anymore. Concussion doesn't have to be invisible."