Ask the doctor: Why do I keep having these dizzy spells? 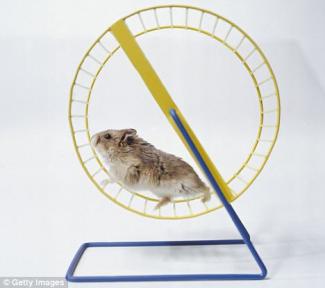 Once again I am stuck at home with labyrinthitis. I was diagnosed 15 years ago and this is probably the fifth time I have had to go to the doctors; other times I just deal with it and can work. I wonder if you have any advice for this annoying condition.

You've been told you have labyrinthitis, but what this really means is that you have vertigo - not a fear of heights, but an alarming, dizzy sensation very much like the feeling we all used to get when jumping off a roundabout in the playground.

Vertigo is not a diagnosis, it is a symptom, and there are many causes. The term labyrinthitis is often offered as a diagnosis, but is imprecise as, in fact, there are a number of disorders that it's used for.

The labyrinth is made up of small, fluid-filled tubes (canals) in the inner ear, which are responsible for balance. Labyrinthitis is a general term describing any upset of that mechanism.

The main symptom of a labyrinth disorder is vertigo; others include nausea and vomiting, which can be severe, leading to dehydration. As balance is affected, patients can be unstable on their feet and walk as if drunk. Vertigo is never a permanent symptom - it comes and goes, with the bouts lasting from a few seconds to a few days (as with one particular form of labyrinth disorder).

A single episode lasting hours can be due to a type of migraine (which may also cause a headache or visual disturbance such as zigzags, but not always).

Vertigo lasting for days, especially if there has been a viral illness, suggests a virus infection of the inner ear, in which case the term viral labyrinthitis is used. But this is not something that would recur several times over 15 years, so cannot be your problem.

Recurrent brief attacks are usually due to benign paroxysmal positional vertigo, and I'd suggest this might be what you have.

The condition is due to the formation of crystals in ear canals - debris built up over time.

It accounts for about 20 per cent of patients who present at dizziness clinics and is diagnosed by a neuro-otology consultant using the Dix-Hallpike manoeuvre.

This involves your head being moved through a set of positions while the clinician watches your eyes for certain oscillating movements, a sign of benign paroxysmal positional vertigo. Treatment is with the Epley manoeuvre - a head movement process, with the aim of encouraging the crystalline debris to move to a part of the ear where they no longer cause dizziness. '

This is effective, though it may be followed by a week or two of milder symptoms. An alternative is the Cawthorne-Cooksey series of head exercises, which are practised daily. A suitably trained physiotherapist can take you through these.

However, most benign paroxysmal positional vertigo does disappear spontaneously after a few days or weeks, though it can recur - 30 per cent of people suffer another attack within three years.

You have been particularly unlucky to have so many recurrences, and the involvement of a neuro-otologist or a specialist physio would be valuable.