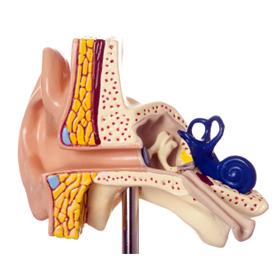 ‘That’s it — I’m done,” Rachel Miller proclaimed, the sting of the neurologist’s judgment fresh as she recounted the just-concluded appointment to her husband. Whatever was wrong with her, Miller decided after that 2009 encounter, she was not willing to risk additional humiliation by seeing another doctor who might dismiss her problems as psychosomatic.

The Baltimore marketing executive had spent the previous two years trying to figure out what was causing her bizarre symptoms, some of which she knew made her sound delusional. Her eyes felt “weird,” although her vision was 20/20. Normal sounds seemed hugely amplified: at night when she lay in bed, her breathing and heartbeat were deafening. Water pounding on her back in the shower sounded like a roar. She was plagued by dizziness.

“I had started to feel like a person in one of those stories where someone has been committed to a mental hospital by mistake or malice and they desperately try to appear sane,” recalled Miller, now 53. She began to wonder if she really was crazy; numerous tests had ruled out a host of possible causes, including a brain tumor. Continuing to look for answers seemed futile, since all the doctors she had seen had failed to come up with anything conclusive.

“My attitude was: If it’s something progressive like MS [multiple sclerosis] or ALS [amyotrophic lateral sclerosis], it’ll get bad enough that someone will eventually figure it out.”

Figuring it out would take nearly three more years and was partly the result of an oddity that Miller mentioned to another neurologist, after she lifted her moratorium on seeing doctors.

By 2010, Rachel Miller was wondering if she would ever be able to go fishing again: She couldn’t take the rocking motion of the boat.

“It was very lonely sometimes,” she said of the five years she spent contending with feeling off-kilter even though she appeared to be perfectly normal. “I just gritted my teeth” and tried to carry on.

Miller vividly remembers the unusually hot spring day in 2007 when her problems began. While working in the garden, she bent over and a sudden wave of nauseating vertigo knocked her to her knees. Too dizzy to walk, she crawled into the house and spent the rest of the day in the air conditioning lying still.

Miller at first blamed the heat and her lack of breakfast. Several hours later, after the spinning subsided, she noticed that her head felt funny and her vision seemed off.

“It’s hard to describe, but it was as though I was looking at the world through someone else’s eyes,” she recalled. “The world looked different.”

The dizziness did not disappear and was sometimes severe. “My brain didn’t seem to know where my feet were, and my head seemed disconnected from my body.”

Her internist ordered a series of tests — CT scans of her brain and later MRIs — which found nothing. Over the next two years, she made the rounds of specialists — ear, nose and throat doctors, neurologists and even a neuro-ophthalmologist — none of whom found anything noteworthy. An ENT thought that perhaps her deviated nasal septum and sinus polyps might be the cause. Miller underwent two sinus surgeries, but her symptoms remained undiminished.

A second ENT decided the most likely cause was a vestibular migraine, a severe headache of which vertigo is a common feature. He prescribed nortryptyline, a tricyclic antidepressant sometimes used to treat migraines, which Miller took for a year without noticing any improvement.

Other doctors focused on a concussion she suffered in 2003 when she was struck by a car. But none of them could figure out what the connection between her head injury and her symptoms might be.

By 2009 just getting through a workday had become a major effort. Miller had trouble concentrating, and she worried that she was so wobbly her co-workers might think she was drinking on the job. She tried not to leave her office; at times, she walked down the hall discreetly trailing her index finger along the wall in an effort to maintain a straight line. She was terrified to walk in the dark and had fallen several times because she didn’t know where her feet were.

Her vision was especially bothersome. Trained as an artist, Miller said she was “really, really aware of how I saw things” — and they didn’t look right. Parallel lines looked especially off.

Miller’s hearing also had undergone a change. As she lay in bed, her heartbeat and breathing sounded overly loud but oddly muffled, as though she was listening to both underwater. At the same time, her ability to hear out of her right ear had diminished.

In 2009, Miller consulted a neurologist who listened to her story and zeroed in on her training as an artist.

“You’re just like my wife,” Miller said he told her, “a very sensitive person.”

“Are you telling me that this is all in my head?” she asked him, already surmising that his answer would be yes. Miller said she found the doctor’s assessment devastating but not entirely surprising. Other doctors, at a loss for a diagnosis, had suggested she try Prozac. She resolved to stop talking about the problem or seeing specialists.

“I was lucky,” she said. “I had a husband who knew something was wrong and tried, however inadequately someone can, to be there.”

In 2010, Miller felt her symptoms were getting worse. She wondered if she’d ever again be able to go fishing, a favorite pastime, at the cabin in rural Canada where her family vacationed; she couldn’t take the rocking motion of the boat. During a physical, the nurse practitioner in her internist’s office asked Miller if she’d ever gotten an explanation for her balance problems. Miller replied that she hadn’t; the nurse urged her to keep looking.

Miller resumed the search but decided she was done “mucking around with garden-variety doctors.” She remembered that the patronizing neurologist she’d seen in 2009 told her he had studied under David Zee, a vertigo expert at Johns Hopkins. And her ENT had previously suggested she consult John Carey, a professor of otolaryngology at Hopkins. Consulting them sooner, Miller says,“would have saved me about two years.”

She called Zee’s office and, after filling out a detailed 16-page questionnaire and collecting her medical records, was given an appointment with the neurologist.

“I was very belligerent when I saw him,” she said of the September 2011 appointment. She worried that Zee, an internationally prominent neurologist who directs the Vestibular/Eye Movement Treatment Lab at Hopkins, might blow her off, too.

Near the end of her visit, Miller mentioned something she’d told her other doctors; she considered it significant, but none of them had seemed interested. “You’ll probably think this is silly,” she told Zee, “but when I stick my finger in my right ear to scratch it and pull the finger out, I go blind for a second and lose my balance.”

Zee asked Miller to demonstrate. She did and he watched intently, then asked her to repeat it several times. The pressure created by the finger release caused her eyes to rotate abnormally. Later, Zee picked up a medical tuning fork, an instrument used to assess the nerves outside the brain and spinal cord. When Zee tapped her ankle bone, Miller told him she felt nothing but heard the sound vibrating loudly in her head.

Zee told Miller that she wasn’t crazy. Although further testing would be required for confirmation, he suspected she had a rare condition known as superior canal dehiscence syndrome, or SCDS. Her increased sensitivity to sounds, along with the vertigo, unsteadiness, abnormal eye movements and visual disturbances were all symptoms of the recently identified disorder.

The syndrome results from a dehiscence — a thinning or a hole in the temporal bone, which covers the fluid-filled canal in the inner ear. The hole allows the fluid, which helps control balance, to touch the brain, transmitting sounds such as a heartbeat, a voice or the ordinarily imperceptible sound of the patient’s eyeballs as they move. In essence, the body’s internal gyroscope is damaged, which affects balance, vision and hearing. In Miller’s case, the concussion she suffered in 2003 or an earlier head injury at age 15 when she was thrown from a horse may have triggered the problem.

The disorder is believed to be present at birth, but it can take a head injury to cause symptoms, which usually don’t show up until middle age. Some patients have no symptoms and are not candidates for surgery, while others, like Miller, are seriously affected.

SCDS was first identified in 1995 by Lloyd Minor, formerly a Hopkins ENT who is now dean of the medical school at Stanford University. In 1998, Minor devised a treatment that involves plugging the hole using tissue and bone taken from the skull. Both Zee and Carey, who operated on Miller, were members of Minor’s pioneering team.

“Most doctors, when you tell them you have vertigo, it just elicits an eye roll and they think, ‘There goes an hour,’ ” said Carey, who has treated more than 200 patients with SCDS. The causes of dizziness, one of the most common medical problems, could fill a textbook, and “most doctors don’t ask the right questions so they can winnow it down,” Carey said.

In some cases, patients with the syndrome are misdiagnosed as having a psychiatric disorder, including paranoid schizophrenia, after they complain of symptoms such as hearing their eyeballs move.

Carey operated on Miller in May 2012. She spent about six weeks recovering, a period that included dizziness worse than any she’d previously experienced. But the problem receded, then disappeared, as her brain reoriented itself.

A few days after surgery, Miller said, she awoke and was thrilled by what she didn’t hear: her heartbeat or her breathing. “It was quiet in my head for the first time in I don’t know how long,” she recalled.

Her vision and hearing are now normal, and although she has occasional balance problems when she gets a cold, Miller feels like her old self. “I’m incredibly grateful to them,” she said of Zee and Carey. “I told my husband I couldn’t believe I had lived like that for five years.”