Cause and treatment of dizziness in Oriental medicine 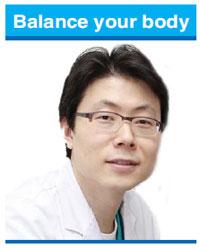 Dizziness is a condition that occurs when a patient feels motion even though they and their surroundings are not moving. Much like headaches, many people encounter dizziness in their daily lives. Dizziness includes normal physiological reactions to external stimuli such as going up a high building and motion-sickness, as well as those caused by life-threatening illnesses such as brain tumors and strokes. I do see a fair number of patients who visit the clinic due to dizziness, but it is not a straight-forward procedure to diagnose the root causes because dizziness is a common symptom for various illnesses.

Generally, dizziness can be categorized into peripheral, central and psychological types. Peripheral dizziness, which accounts for most of our experience, is caused by the issues in the vestibular organ in the ears that play crucial role in maintaining body balance by detecting horizontal, vertical and rotational motions. Benign paroxysmal positional vertigo (BPPV), Meniere's disease, and vestibular neuritis fall into this category.

BPPV is caused by the dislodging of otoconia, collections of calcium crystals in the inner ear that detect th orientation of gravity. When the otoconia (colloquially known as “ear rocks”) are displaced due to shock or aging, patient can feel severe vertigo that feels as if the room is spinning, and vomiting, nausea and cold sweat. This form of dizziness typically lasts less than a minute. If you feel dizzy when turning the head around or when you are getting out of bed, chances are high that you suffer from BPPV. Particle repositioning head maneuver can return the displaced otoconia to its rightful position, and 90 percent of the patients experience improvement. However, there is a 40 percent likelihood of recurrence after treatment.

If you feel dizzy while experiencing loss of hearing, ringing and tight feeling in the ear, it is likely that the cause is Meniere's disease. The famous Dutch artist, Van Gogh was known to have suffered Meniere's disease. Some argue that the painter cut off his ear because of it rather than from his own madness as the popular story goes. While dizzy spells from BPPV last a very short time, dizziness from Meniere's disease can last from minutes to hours, adding to the agony of the patient. If severe, the patient can lose hearing ability altogether. For the patients, it is important to limit the intake of salt in the diet to prevent the lymph from swelling.

Vestibular neuritis is when the vestibular organ is infected, known to be viral in its origin. Although there is no damage to hearing, patients can experience dizziness, vomiting and nausea that last for hours or longer. Fortunately, aftereffects or recurrence is rare.

Central causes for dizziness are issues in the central nervous system, generally in the brain stem and the cerebellum. In such cases, dizziness is accompanied by a slowing of speech, difficulties in swallowing, lack of awareness, motor disturbance and dysesthesia. Although it is not a commonly occurring symptom, the illness itself requires urgent attention, and often the prognosis is adverse.

Psychological causes for dizziness are generally associated with stress from depression, panic disorder, restlessness or physical exhaustion. As such, there are no physiological issues detected in the diagnosis.

Oriental treatment for dizziness focuses on normalizing the functions of the vestibular organs and cerebellum by promoting the Qi and blood flow in the head. For these purposes, acupuncture is administered on the acupuncture points and meridians around the ear, Chuna chiropractic adjusts the temporomandibular joint, and Hanyak, the Oriental herbal medicine, is prescribed. Oriental medicine regards that dizziness is caused by upper excess and lower deficiency. Exuberance of pathogenic qi in the upper body and deficiency of healthy qi in the lower body, the same as excess above and deficiency below, and Hanyak corrects this issue.

Some people disregard dizziness as a simple spell of anemia. However, in today’s nutrition-rich society, the occurrence of anemia is on the decrease in general although there are some female patients on a very strict diet who suffer from anemia. Others who suffer nausea and vomiting along with dizziness mistakenly think that it is a simple bout of stomach flu or indigestion. However, if you do suffer from repeated occurrence of dizziness, it is advised that you seek proper medical advice.

The writer practices Korean Oriental medicine at the UN Oriental Medical Clinic in Hannam-dong, Seoul. He can be reached at [email protected]