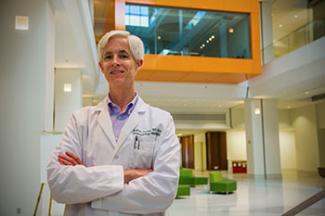 For several decades, researchers at the National Institute on Deafness and Other Communication Disorders (NIDCD) have been leading an effort to understand the genetic underpinnings of enlarged vestibular aqueducts (EVA), a condition associated with early hearing loss in children, and in some cases, thyroid problems in the teenage years.

As the NIDCD scientists make great strides in understanding the causes of hearing loss in children with EVA, they are also contributing to our understanding of the molecules and mechanisms involved in healthy hearing.

The vestibular aqueduct in a normally-hearing ear is a narrow canal that travels from the inner ear to deep inside the skull and serves as a conduit for the fluid that fills the inner ear. In a small number of people, however, the aqueduct is distended. While enlargement of the aqueduct is typical of EVA, the exact role this malformation plays in hearing loss continues to be an active area of research.

Close to a quarter of the children born with EVA have a more serious disorder called Pendred syndrome, which typically causes hearing loss from birth and progresses to profound deafness. However, most children with EVA travel on a less predictable path. They often pass newborn hearing tests, but begin to lose their hearing within the first few months or years of their lives. From this point on, their hearing resembles a roller coaster ride, dropping into abrupt episodes of hearing loss, followed by recoveries over the following days or weeks. Often one ear is affected more than the other.

These fluctuations in hearing begin at a particularly vulnerable time in development, when language acquisition is normally at its peak, but when most children don’t yet have the language skills to tell their parents or educators that they are having trouble hearing.

Currently, it’s impossible to determine what the future holds for children with EVA. Their hearing generally worsens over time, and some may eventually become profoundly deaf. But others have a more fortunate course and maintain fairly stable hearing—at least in one ear—and can manage their hearing loss with hearing aids for the rest of their lives.

The parents of children with EVA are faced with a difficult decision. Moving ahead with cochlear implant surgery—a procedure that replaces the cochlea, a snail shell-shaped structure in the inner ear, with an electronic device—would quickly improve their child’s hearing. But many parents, and some surgeons, are reluctant to have a child with EVA undergo the surgery while he or she still has some natural hearing, choosing instead to wait and see how well the child’s hearing holds up.

Adding to the dilemma is the issue of timing. Cochlear implants work best when inserted early, allowing the area of the brain that processes sound to develop around the input it receives from the implants and to make the most of what it receives. Children implanted by their first birthdays can learn to speak and communicate almost as well as, if not as well as, their normal-hearing peers, provided they participate in intensive therapy to help them learn to interpret the sounds created by the implant. With the clock ticking, parents of children with EVA grapple with what seems like a trade-off—getting the implants early and maximizing the result, or waiting to see if their child’s biological hearing will be preserved.

“If you talk to 10 different cochlear implant surgeons, you might get 10 different philosophies about how to deal with this situation. Most just shake their heads and say they wish we had something better,” says Andrew J. Griffith, M.D., Ph.D., scientific director in the intramural division at the NIDCD and an expert on EVA. “That’s one of the things that inspired me to work on this—we don’t do as well as we could for patients. We need better options.”

Over the years, researchers who study EVA have followed paths of exploration that have taken as many twists and turns as the hearing of someone with the disorder. Researchers initially focused on structural abnormalities associated with EVA. Malformation of the cochlea, a common feature of the condition, was originally thought to be the cause of hearing loss.

But research in the past few decades led researchers to turn their attention to the vestibular aqueduct. Clinical studies showed that enlargement of the vestibular aqueduct was the most common structural abnormality associated with EVA, rather than a malformed cochlea, and in some people it was the only structure that was abnormal. These studies suggested that enlargement of the aqueduct caused the hearing loss, even though researchers couldn’t rule out that an enlarged aqueduct might be only a marker for another, as yet unknown, problem.

The discovery of the first gene associated with Pendred syndrome by scientists at the National Institute of Health’s (NIH’s) National Human Genome Research Institute moved the research in another direction. Identification of this gene, called SLC26A4, launched a new area of investigation into the molecular mechanisms that underlie the syndrome and its related condition, EVA.

The SLC26A4 gene contains the instructions for making a protein, pendrin, which is embedded in the membranes of inner ear cells, including cells of the vestibular aqueduct. Pendrin helps move negative ions across the cell membrane, but its exact role in hearing was a mystery.

Cells use a variety of transport mechanisms, such as pumps and exchangers, to maintain the proper ion composition on both sides of the cell’s outer membrane. Preserving the correct ion levels is important for all cells, but it’s especially important for sensory cells like those in the inner ear because ions are key players in the pathway that transmits sound signals to the brain.

At this point many scientists agreed that an animal model of EVA would be an important next step. An animal model that reproduced the most important characteristics of the disorder would enable them to delve more deeply into pendrin’s role in hearing and could be used to test the effectiveness of novel therapies.

Producing an animal model of EVA, however, turned out to be harder than expected. Knocking out the gene, which yielded mice with no functional pendrin, resulted in much more severe symptoms than typically seen in people with EVA, including profound, persistent hearing loss at birth.

A team of researchers led by Dr. Griffith and Philine Wangemann, Ph.D., university distinguished professor in the College of Veterinary Medicine at Kansas State University, next tested the idea that withholding pendrin for part of a key developmental period in mice might result in the milder and more variable symptoms typical of the condition. Their hunch turned out to be correct—using this method, they produced mice that had characteristics that closely mimicked EVA—the animals’ hearing ability rose and fell erratically and one ear was often more affected than the other.

“The generation of this mouse model was very exciting,” says Dr. Griffith. “Fluctuating hearing loss is one of the toughest problems for us to treat and it’s probably the least understood. This mouse model has become an enormously valuable tool for helping us figure out what’s going on.”

found evidence that damage to a structure

called the stria vascularis could be a factor

in hearing loss associated with the condition.

(green in the image) were also found to

accumulate in the stria vascularis, suggesting

that immune system malfunction could

contribute to the degeneration of this structure.

in green, blue and red) helps achieve the

proper ion balance in the fluid that bathes

the inner ear using a variety of pumps and

exchangers, such as the potassium ion pump

suggests that in EVA, the stria vascularis

becomes damaged, which disturbs the

fluid’s ion composition and results in

Research on these mouse models brought about yet another shift in thinking among researchers about what might cause EVA. While enlargement of the vestibular aqueduct is still a gold standard used in diagnosing the condition, many scientists now believe it is not the direct cause of hearing loss and may just be a side effect of another, more basic, process that is going on within the inner ear.

The new mouse models confirmed what was first observed in the pendrin knock-out mice—the fluid that fills the inner ear is unusually acidic, suggesting that this abnormality could underlie hearing loss in people with EVA. Pendrin normally would help reduce the fluid’s acidity by neutralizing it with negative ions. But when the protein is not fully functional, as in the mouse models or in people with EVA, the acidity could rise and possibly damage key hearing structures.

…And Leads to a New Structure to Study

When the researchers looked for signs of damage in the model mice’s inner ears, they noticed degeneration of a structure called the stria vascularis. This structure is rich in ion pumps, and as mentioned above, these pumps are critical for maintaining the correct ion composition in the fluid that bathes the inner ear’s sensory cells. Damage to the stria vascularis could disturb these crucial ion levels and impair sensory cell function, resulting in hearing loss.

Further experiments revealed that the ion levels were affected in the model mice’s inner ear fluid, indicating that the damage to the stria vascularis the researchers had observed was affecting its function. These results, along with studies that showed severity of hearing loss did not correlate with the degree of enlargement of the vestibular aqueduct, further strengthened the shift to a new model in which hearing loss in people with EVA stems from impaired function of the stria vascularis.

If the past is anything to go by, the future of EVA research may hold a few more surprises. But researchers are optimistic that some answers are within reach and that new treatment strategies will emerge.

“People have been wedded to certain theories about EVA for years, but recent advances have called these assumptions into question and opened up entirely new lines of inquiry,” says Dr. Griffith. “It’s a very exciting time to be working on EVA. I believe we’ll soon have a clearer picture of what causes it and some new ideas on how to treat it.”