A Better Online Diagnosis Before the Doctor Visit 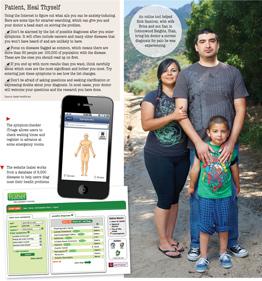 When Rick Ramirez started experiencing sharp pains in his back and legs last year, a doctor was unable to find the cause. But as the pain continued, the 27-year-old Utah brokerage-firm staffer turned to an online symptom-checker named Isabel designed to help patients figure out what's ailing them.

With an abundance of websites and apps offering similar services, consumers are increasingly acting as their own diagnosticians when they experience a new health problem. That can be alarming for doctors, especially if patients show up armed with a scary list of unlikely maladies from the Internet, demanding expensive and unnecessary tests. It can also be dangerous for patients if they fail to seek expert medical advice for a problem after mistakenly concluding they don't need a doctor.

Now more health-care providers are turning the tables, steering patients to new and improved computerized symptom-checkers that make it easier for them to get reliable information about possible diagnoses, research their condition and even connect directly to a doctor. Doctors are adding these tools to their websites and incorporating them into electronic medical records, encouraging patients to use them before office visits to save time and make consultations more productive. Another benefit: Results turned up by a symptom-checker may actually help doctors think of something they hadn't considered.

According to a December survey by Philips North America of over 1,000 people in the U.S., more than 40% said they were comfortable using websites to check their own symptoms. A quarter said they used such websites or technology as often as they visit their doctor and about the same number said they used it instead of visiting their doctor.

Of course, symptom-checkers can lead patients and doctors alike down the wrong path. "People tend to freak out when they read all the scary conditions they might, but don't actually, have," says Mark Graber, president of the Society to Improve Diagnosis in Medicine and senior fellow at nonprofit research concern RTI International.

But Dr. Graber, also a physician at the Northport Veterans Affairs Medical Center in New York, says "suggesting a range of possibilities to your M.D. might help prevent the premature closure errors that underlie so many diagnostic errors."

"Patients are experts on their symptoms and doctors are experts in working out their probable causes," and need to work together to formulate a list of possible diagnoses, says Jason Maude, chief executive of Isabel Healthcare, launched in 2001 as a professional online diagnostic checklist for doctors.

Mr. Maude, a former equity analyst who lives in the U.K., developed the program, which providers pay to use, and named it for his daughter, now 17, who had chickenpox at the age of 3. She developed a life-threatening infection, necrotizing fasciitis, that is a common complication but was missed at the time. In a study co-authored by Dr. Graber in the Journal of General Internal Medicine in 2007, Isabel suggested the correct diagnosis in 48 of 50 complex cases, or 96%. (Dr. Graber has no financial or other ties to Isabel.)

Last November, Isabel launched a free online symptom-checker for consumers that can take a pattern of symptoms that patients enter in everyday language and instantly compute the most likely diagnoses from its database of 6,000 diseases, while pushing the more far-out possibilities down the list.

Mr. Ramirez came across Isabel in February while experiencing sharp pain in his legs, buttocks and lower back that started in November 2012 and had bothered him intermittently since. He thought it might be connected to a 2008 accident when his car was rear-ended. He saw a doctor who examined him and suggested he might be wearing his belt too tight. With a busy job in quality assurance at a Salt Lake City brokerage firm, he didn't want to waste time on another doctor visit. After trying several online symptom-checkers, he found Isabel to be the most useful. Since his accurate online diagnosis, Rick Ramirez has stepped up his exercise regimen to help his back.

He entered his radiating pain symptoms, and Isabel returned several possible diagnoses, flagging a slipped disk as a common possibility. The site also led him to more information about the condition. He says he decided to visit an urgent-care center in April, bringing along his research from Isabel, and an MRI ordered there confirmed that he did indeed have a slipped disk, also known as a herniated disc. Mr. Ramirez says he received a steroid shot, which helped, and is working to relieve his pain with exercise, but may eventually need surgery.

Omaha Children's Hospital & Medical Center in Nebraska, whose doctors use the professional version of Isabel, added a link to the consumer symptom-checker on its website's home page in January and will also put the link on the login page of a new electronic medical-record system. "People are already using the Internet for health information and we are giving them a much better tool than just googling a bunch of stuff," says physician and chief information officer George Reynolds. "They get better and smarter questions to come to their doctor with."

Many consumers go to WebMD, the popular health website, which last year added a new indicator bar to its symptom-checker that helps identify the most likely match for symptoms. Mayo Clinic also offers a free symptom-checker. On its website healthychildren.org, the American Academy of Pediatrics offers a symptom-checker for parents. It has nearly 1.2 million views annually.

"Kids can get sick any time of the day or week and oftentimes parents' questions can be answered by looking at a trusted source online," says Jennifer Shu, an Atlanta pediatrician and medical editor of the website. "This helps them to get a head start on their research and triage whether they need to go to the E.R., or see a doctor or what to do to take care of it home."

Some health providers are turning to companies that include symptom-checkers as part of a broader set of interactive tools for patients, including A.D.A.M., a health information concern acquired in 2011 by insurance software company Ebix Inc. Its symptom-checker has been improved to allow patients to add more detailed information, and it will soon allow patients to let doctors review results online to determine if they need to be seen, which can "prevent unnecessary use of health care services," says A.D.A.M. Vice President Soula Chronopoulos.

iTriage upgraded its free symptom-checker in June to let consumers add age, gender and up to two associated symptoms in addition to a primary symptom. The service, launched in 2009, lists common causes and flags those that may be critical, and offers a directory of nearby providers. (Insurer Aetna purchased the company in 2011.) Clinics and hospitals can pay to add details to their listing, such as appointment-scheduling information or E.R. waiting times, "Our goal is to take you from 'I don't feel well' to having a booked appointment with the right kind of doctor for your condition," says co-founder and Chief Executive Pete Hudson.

Lauren Snider, a 31-year-old physical therapist in Tallahassee, Fla., loaded the iTriage app onto her phone in May after experiencing sinus problems and a terrible headache. The symptom-checker helped reassure her that it might be a sinus infection. A visit to the Capital Regional Medical Center's emergency room confirmed the diagnosis. She received an antibiotic and a shot for pain relief. "This can really help if you don't know what's going on and you need some clarification or confirmation," she says.