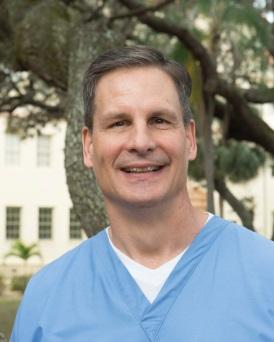 Normal examinations that result in abnormal VEMP findings can provide evidence that acoustic trauma may be the basis of otolith-related “dizziness and balance trouble.”

The recent addition of the vestibular evoked myogenic potential (VEMP) test for the C.W. “Bill” Young Department of Veteran’s Affairs Medical Center, has increased the sensitivity and specificity of balance testing. This test allows healthcare providers a direct assessment of otolith function. Examination of a young service member or veteran with vague complaints of “dizziness” and “trouble with balance” in the past typically resulted in normal findings. Young patients often possess a physical prowess that may overcome mild vestibular deficiencies on computerized dynamic posturography testing, which results in normal data. Other vestibular tests do not directly assess the otolith system. More times than not, these otherwise normal examinations now result in abnormal VEMP findings and can provide evidence that acoustic trauma may be the basis of otolith-related “dizziness and balance trouble.” A demonstrative case study follows.

The most commonly cited demonstrative cause of benign paroxysmal positioning vertigo (BPPV) is trauma1. “Primary” or “idiopathic” BPPV accounts for about 50%–70% of cases. The physical trauma can be as mild as a bump of the head or, in some cases, acoustic trauma. These injuries may resolve over a period of months. The result of such an injury might, however, cause damage to structures inside the inner ear which make up the otolith system.

The otolith system consists of two structures for each ear, a total of four structures in all. Two of them are slightly larger and horizontally oriented and are called the utricle. The other two are smaller and vertically oriented and are called the saccule. These kidney-bean-shaped end organs are responsible for the detection of gravity and the sense of linear motion2. These structures may become damaged due to head injury or acoustic trauma. They may be temporarily damaged and recover with time. They may also be permanently damaged and degrade with time. This damage may release particles held inside the organs called otoconia, often referred to as “ear rocks” or “crystals.” Hearing hair cells, or stereocilia, may be temporarily or permanently damaged as a result of an acoustic trauma resulting in some degree of measureable hearing loss, usually of the high frequencies. The effects of this damage may or may not resolve soon after the trauma3.

In cases of noise-induced BPPV, it is deduced that because of the close spatial proximity of the otolith organs to the stapes bone of the middle ear,4,5 trauma may cause the stapes to forcibly vibrate beyond its normal operating characteristics, and perhaps physically contacting otolith organs, resulting in damage6,7. There might be permanent damage, and there might be a release of otoconia resulting in the routine BPPV sequela.

When otoconia are released from within the utricle these particles can float randomly within the inner ear. Otoconia are known to be heavier than the surrounding fluid, which usually results in their falling to the bottom of the posterior semicircular canal. This, in turn, can disturb balance and cause positioning vertigo by deflecting the cupula as the otoconia are pulled by gravity when the head changes position. Otoconia might dissolve or disappear over time, since many occurrences of BPPV are short-lived. As a result of this movement of otoconia in BPPV, this condition has three general characteristics: 1) it takes a change in position to initiate any vertigo; 2) it is typically one-sided causing short-lived vertigo with a movement of the head in a particular direction and 3) it is random in its occurrences. 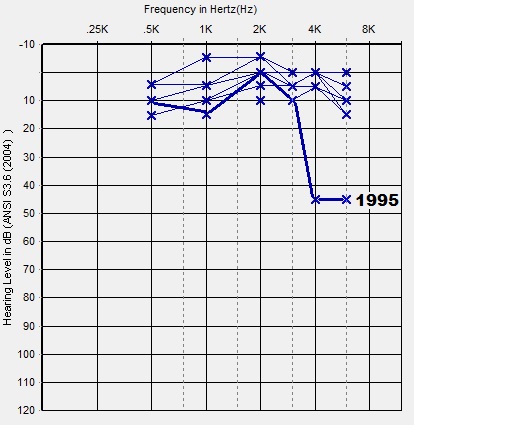 The patient of interest is a 42-year old male veteran who presents with the typical complaints of BPPV. The veteran served as a communications specialist in the United States Marine Corps (USMC) from December 3, 1991 through December 2, 1995. The USMC tested and documented eight hearing tests over this four year period. There is no history of noise exposure prior to or following active military service. During active military service the service member was subjected to routine weapons training and in active service during his active duty in his USMC unit. There was one particular blast injury that temporarily produced high frequency hearing loss in the left ear. Hearing tests a year later documented recovery of hearing sensitivity in these high frequencies. {Figure #1} The hearing levels of the right ear were always within normal limits. 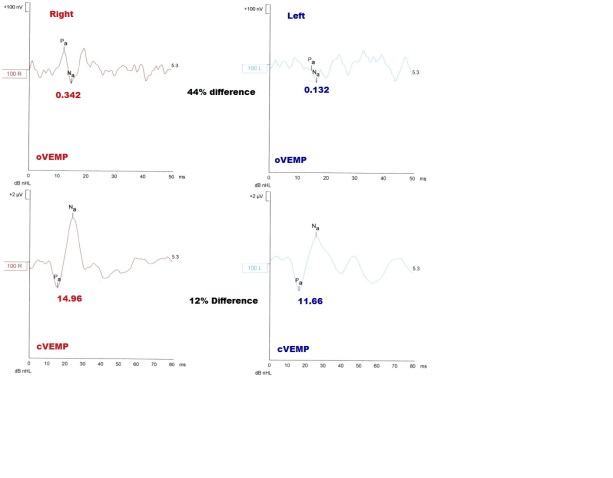 At the time of the recent balance examination the veteran was a 41 year old male reporting “dizziness” (three episodes) to his primary care physician. Twenty days later the veteran examined for balance. The veteran was provided pre-test instructions in preparation for the testing and given an overview of the examination process. On the day of arrival, the veteran provided vague complaints of a mild imbalance and a typical BPPV history. A balance assessment at our facility is comprised of three basic parts: 1) computerized dynamic posturography (which was normal); 2) rotary chair testing to include a search for spontaneous nystagmus, horizontal and vertical eye movement tests, sinusoidal harmonic acceleration, step velocity (trapezoid) testing (all of which were normal); 3) videonystagmography to include tests for positioning and positional nystagmus, a search for spontaneous and latent (status post head-shaking) nystagmus, binaural-bithermal caloric irrigation of the ears, horizontal and vertical vestibular ocular reflex test (VORTEQ); horizontal and vertical video head-impulse testing (vHIT) (all of which were normal); and the vestibular evoked myogenic potentials (VEMPs)  (which were abnormal). {Figure #2} 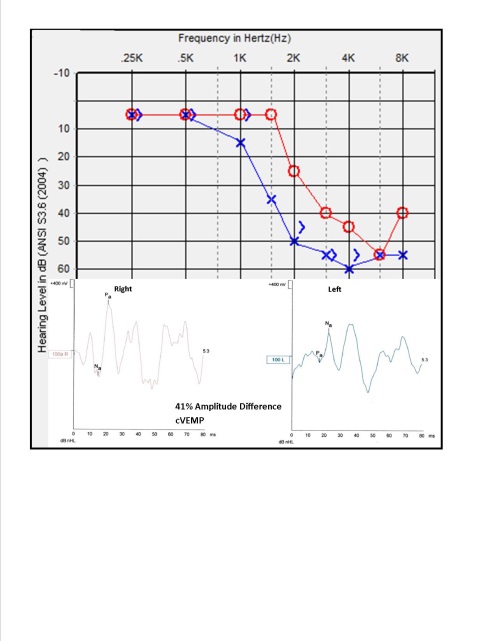 The testing did not support a central nervous system, medication-induced, somatosensory, horizontal semi-circular canal or oculomotor system problem. The abnormal oVEMPs showed an amplitude difference which is greater than our 30% criteria for a utricular abnormality; cVEMPs were normal. The abnormal cVEMP on the left indicated a utricular disorder. It is probable that the acoustic trauma that caused the temporary threshold shift also caused permanent damage of the left utricle resulting in BPPV. This pattern is seen in another veteran with a similar history and result. {Figure #3}

All of the normal tests might have been the result of active compensation due to the fact that this patient was young, physically strong and possessed the physical prowess to maintain his balance despite this mild peripheral disorder. Cervical (saccule) and ocular (utricle) VEMPs, (cVEMP and oVEMP respectively), are easily and quickly completed with a minimal of instruction and without the potentially nausea genic stimuli of other more complicated tests. This patient will be managed by contacting our physical therapy clinic within 24 hours of the onset of his BPPV symptoms for treatment through the application of the canalith repositioning maneuver.