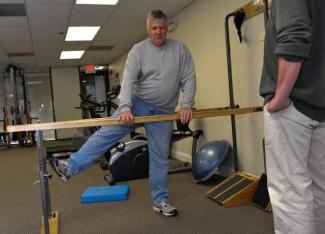 In 1992, 56-year-old Middletown resident Michael Spratford had surgery to remove a malignant brain tumor. But while that problem is long behind him, the tumor left some lingering effects in its wake.

“Ever since the surgery, I’ve had problems with feelings of dizziness. I always feel like I’m falling forward and that I have to steady myself,” he said of a condition that led to his permanent disability from work as well as a string of visits to different neurologists. The medications they prescribed delivered limited success.

But since undergoing specialized therapy for his balance disorder at Crest Physical Therapy, “I’ve started doing things I wasn’t able to do in 21 years,” Spratford said.

“Our balance system is actually comprised of three systems that help keep us upright — our eyes (optic), our inner ear (vestibular), and our muscles,” said Charles Curtis, vestibular rehabilitation specialist and director of Crest Physical Therapy in West Long Branch. “All three systems have sensors and communicate back to the brain stem to coordinate function, but a disruption to any one of the three can distort balance.”

When it comes to balance issues, Curtis said, “most patients either have peripheral issues affecting one or more of these systems or a centralized lesion that distorts communication lines to the brain stem.”

The bottom line? “People often change their walking patterns and adapt negatively to accommodate their balance issues,” he said.

According to Curtis, many conditions can cause balance disorders, from a tumor sitting on a nerve to Meniere’s disease, benign paroxysmal positional vertigo (BPPV), high blood pressure, Parkinson’s disease, multiple sclerosis, shingles or other viruses, postural dysfunction, and/or diabetic neuropathy.

These conditions present a widely varying spectrum of triggers that “can often make it difficult to isolate the specific system involved and diagnose the exact cause of the imbalance,” Curtis said.

Regardless of the cause, the results are often the same. “People can feel dizzy, light-headed, throw up, or actually fall, which is itself a problem because the fear of falling often discourages patients from engaging in further activity, which results in weakening muscles and creates a continued downward spiral.”

Curtis explained that therapy includes an evaluation of each patient’s “functional deficits and creating a customized plan for their rehabilitation.”

For example, he said, “if we determine that their optics require strengthening, for example, we’ll work to focus on images in motion, also called gaze stabilization. If a person has difficulty walking in a straight line, we’ll perform a detailed evaluation addressing their strength, stance, arm swing, walking pattern, and static and dynamic balance.”

For Spratford, whose left eye has drifted since his surgery, “we’ve been working on eye exercises and honing in on images while in motion to help him regain better control of that muscle,” Curtis said. “He always felt that he was falling forward because he’d lost coordination of his body by adapting in a negative manner. (When he walked, his step height was limited, his base was too wide, his arm swing was off, and his eyes were focused on the ground.)

With diligent repetition of his exercises at home, “Mike’s going to do very well — he’s got a great work ethic and his function will be increasingly restored without an assistive device,” Curtis added.

“I never realized I was shuffling my feet before — it was just my way of surviving for the past 21 years,” Spratford said.

He said he has learned “that when athletes train, they plan their movements very deliberately. I need to think about my movements in the same way. I’ve never had this kind of therapy before .”

“There’s often a feeling, particularly among seniors, that balance issues go with the territory as we age, but that belief is unacceptable and unnecessary,” Curtis said.

“We’re built to move, and it may require additional motivation, but we can work around balance issues to continue to lead a high quality of life and maintain an independent lifestyle,” he said.