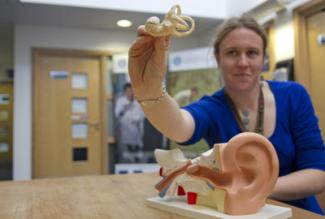 A new study has shed light on the factors likely to lead to the development of a rare condition affecting the inner ear.

In the most comprehensive study of Ménière’s Disease to date, researchers at the European Centre have been able to suggest what goes wrong in the body when people develop the disease, and provide an insight into factors that lead to its development.

Ménière’s Disease can cause tinnitus, hearing loss, vertigo attacks and a feeling of pressure deep within the ear. Yet as a long term but non-fatal illness, it has received little attention from the scientific community – a disheartening fact for the 160,000 sufferers in the UK.

As such, reasons for why people develop the condition and how symptoms occur have so far remained unclear, making diagnosis and treatment a difficult task.

With funding from the UK Ménière’s Society and using data from the UK Biobank, the research team analysed records from 1,376 Ménière’s sufferers. They found the disease is more prevalent in females, those from white backgrounds, and older people.

Individuals from poorer backgrounds were also found to be more likely to develop the disease, as well as those who are overweight.

By comparing and contrasting their data with nearly half a million people without the condition, the team also discovered that Ménière’s Disease is linked to immune system disorders and diseases related to the autonomic nervous system, such as Irritable Bowel Syndrome, Crohn’s Disease and arthritis.

“This study has provided several advances in our understanding of Ménière’s. It seems likely that a dysfunctional immune system has some role in the development of the illness, and other factors, including the nervous system, are also playing a part.”

The analysis also showed that Ménière’s patients were more likely to suffer falls and mental health problems, such as depression, than people without the condition.

“Understanding the impact of Ménière’s on people’s physical and mental health is vital when providing information to people on how best to manage their symptoms. Ménière’s is a condition that can be difficult to diagnose, particularly in the early stages. The more information that can be given to those affected, the better equipped they’ll be to cope day-to-day.”

The study is published in the journal Ear and Hearing