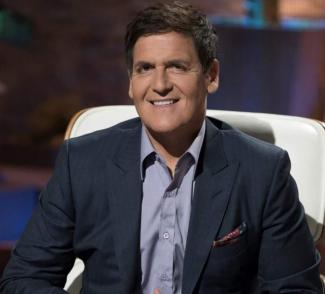 Celebrity, Mark Cuban, shares his vestibular experience, and how virtual reality helped him get back to balance.

Mark Cuban - Shark Tank star, Dallas Mavericks owner, film producer, CEO and business guru - seems invincible. He is admired worldwide for his business savvy, innovative ideas and entrepreneurial mind. So it might surprise you to learn that Mark was sidelined by vestibular disorder for months, with dizziness, brain fog, and an unnerving feeling that something was wrong inside his head.

On his journey to find a diagnosis and learn how to manage his condition Mark, has experienced many of the same challenges and setbacks faced by other vestibular patients. And despite his struggles, he has managed to find his way back to balance.

Mr. Cuban first shared his story in July, 2016 on his blog post titled, “Virtual Reality Gave Me My Brain Back.” Recently, Mr. Cuban generously agreed to share an update on his vestibular experience with Holly Fisher, President of the Vestibular Disorders Association (VeDA). VeDA is a nonprofit organization whose mission is to support and empower vestibular patients on their journey back to balance.

Following are excerpts from Mark’s conversation with Holly and highlights from his blog.

In May, 2015 Mark Cuban was visiting New York City. After a long walk around the city, he returned to his apartment and found he had a headache. The next morning he woke up dizzy. Mark had experienced vertigo in the past, so he figured this was a similar situation and tried some head movement exercises a doctor had taught him 10 years prior, but they didn’t help.

Mark Cuban: “At the end of the day I was still what is easiest to describe as being ‘dizzy,’ but it was far more than that. My brain was in a fog, I felt hungover without having had a drink. My face and ears felt full. I can’t fully describe it or give justice to just how off I felt. My balance was fine. My body below the neck was fine. I never felt better. But inside my head something was definitely wrong.”

VeDA asked Mark if it was particularly hard for him, a person in the public eye and responsible for the running of numerous enterprises, to experience such symptoms. He said, “It’s the same for everyone - scary. No one wants to face waking up every day felling dizzy.”

THE ROAD TO DIAGNOSIS 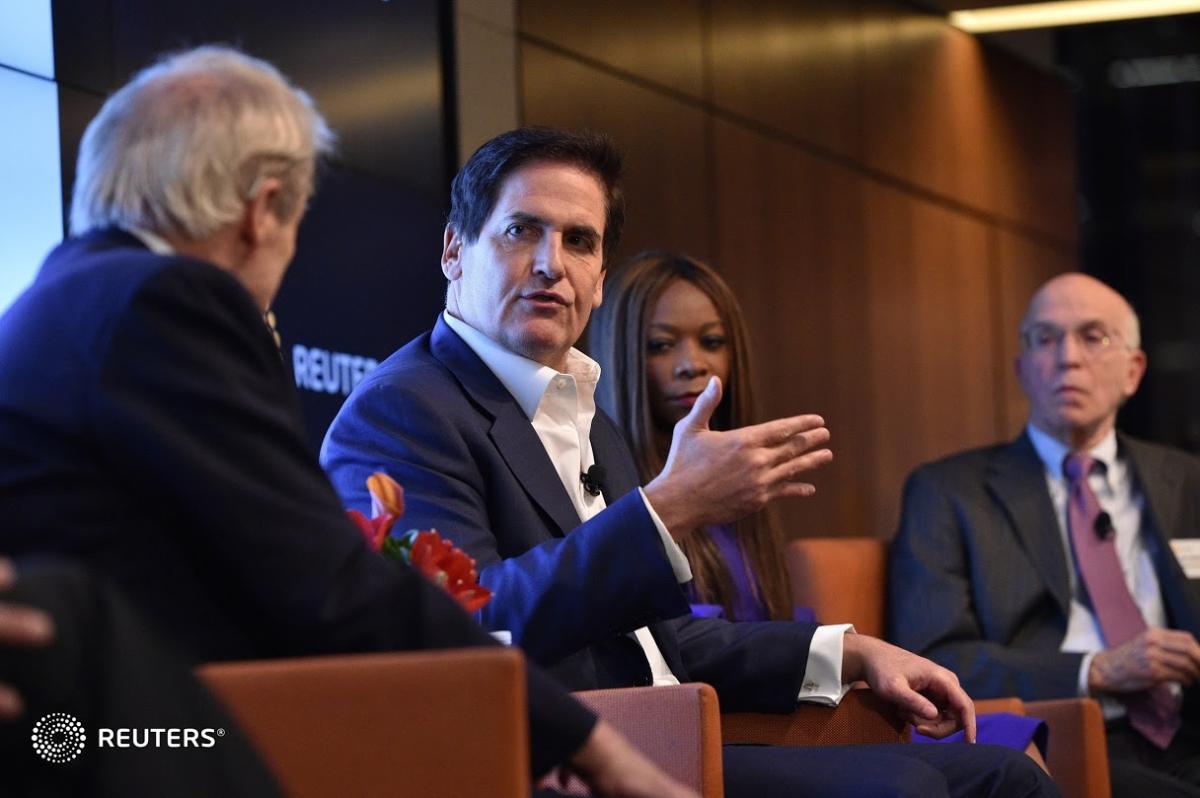 Mark Cuban returned to Dallas. He was still dizzy, so he began looking for answers to his unexplained symptoms. His months’ long journey to diagnosis will sound familiar to many in the vestibular community. He met with numerous doctors - primary care, ENT’s, neurologists, and dizziness specialists. He went through several forms of testing, including MRI’s, MRA’s, and other checks, which turned up nothing. He was asked to try various medications, including some that made things worse, like Klonapin, and some, like Valium, that helped keep his symptoms at bay so he could keep up with his demanding work schedule, but did not solve the underlying problem. He had plenty of doctors that kept pointing towards stress as the root cause of his symptoms, and even suggested seeing a psychiatrist. Mark’s concern was building.

Mark Cuban: “I didn’t want to drive with my family in the car. Every terrible possibility I could conjure in my head as a problem, I did. I read everything and anything that I could about dizziness. Unfortunately, dizziness is a symptom for almost everything. I found nothing.”

The breakthrough for Mark came when he was on vacation in Southern California in August, 2015. In one of his web searches he came across the website for Dr. Howard Mango, one of VeDA’s professional members. Dr. Mango and his team at Newport-Mesa Audiology Balance and Ear Institute took Mark through about 5 hours of tests and discovered that he was suffering from a damaged otolith.

The vestibular system includes the parts of the inner ear and brain that process the sensory information involved with controlling balance and eye movements. The inner ear includes the cochlea, semicircular canals and two otolith organs, the utricle and the saccule, which sense gravity and linear acceleration. The eyes and muscles send the brain information about where we are relative to our surroundings. A disruption in any part of this system can result in dizziness, imbalance, vertigo (a spinning sensation), nausea, and many other debilitating symptoms.

Mr. Cuban explains his condition by paraphrasing audiologist, Dr. Brooke Pearce, “I was dizzy because my eyes, the otolith in my vestibular system, and my brain were out of whack. My damaged otolith was telling my brain I was falling or off balance, but my eyes were saying everything was normal. So my brain was confused and working overtime, resulting in all the problems I was experiencing.” 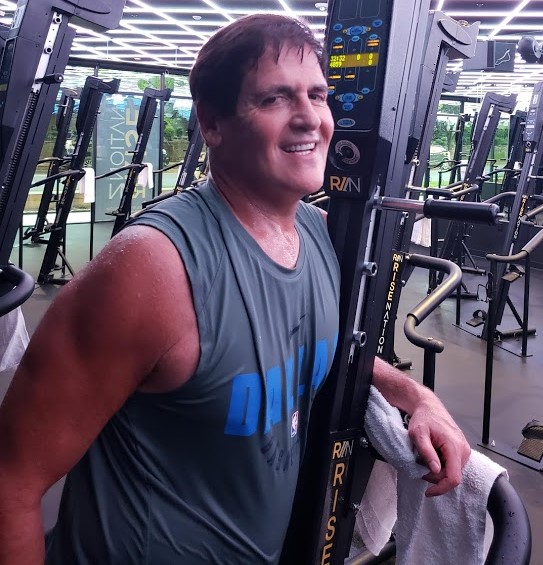 Dr. Mango’s team began working with Mark using a protocol of videos projected on the wall while he sat in a rotating chair. As he watched the videos his eye movements were recorded. Sometimes the chair would move and sometimes it would remain still. Mr. Cuban spent an hour in the chair every day for several weeks. He felt his brain benefiting from the daily treatment, but his time in California was coming to an end.

Mark looked for options to continuing his treatment back home, but the equipment Dr. Mango was using was not available to him back in Dallas. He even considered paying one of Dr. Mango’s staff to come to Texas to help him. “I literally was desperate,” says Mark. The doctors gave him videos to watch on his laptop in the dark, but it didn’t help much. “I wasn’t getting better, and on some days it was much worse.”

Then, Mark Cuban, innovator and entrepreneur, got an idea. “Why not put the videos on my phone and look at them in on (my) Samsung VR (virtual reality) set?” It worked. He started using Dr. Mango’s protocol with his VR glasses every day and every night, sometimes standing, sometimes laying down. Through November, December and January Mark saw improvement in his symptoms, specifically, his horizontal visual alignment abilities. By February, 2016 Mark was having days when he felt completely normal. Today, he still uses his goggles for maintenance every couple of weeks.

Mark Cuban: “I’m back to normal and happy.”

Mark Cuban is working with Dr. Mango on patenting his protocol with a VR delivery system. They hope that eventually the tool can be made more widely available and have a similar impact on other patients with otolith damage.

VeDA asked Mr. Cuban to share his thoughts on this kind of collaboration.

Mark Cuban: “I’m fortunate that I’m a tech guy who could see how multiple protocols could be combined into a VR headset. I think as VR headsets advance so will the ability to integrate vestibular protocols. I’m already working on a solution that moves from headsets that require a phone to using all-in-one VR solutions that only require a headset, which should make the protocols more impactful.”

Mark Cuban had to deal with the brain fog and dizziness of his vestibular illness while running a billion-dollar portfolio of businesses and filming Shark Tank. VeDA asked him if people at work or at home could tell that he was having a problem.

Mark Cuban: “Yes. It was obvious that something was wrong. People asked. I didn’t feel pressured to explain it because I couldn’t. I did have to work, so my focus was on finding workarounds and hacks to minimize the symptoms.”

Mark Cuban: “My family didn’t really understand what I was going through but they knew I was miserable and supported me in every way they could.”

MARK’S ADVICE TO YOU

Many vestibular patients feel isolated and unable to admit their challenges for fear of losing their job, independence or legitimacy. We asked Mark if he had any advice for these individuals.

Mark Cuban: “This is an illness like any other. There is no reason to hide it or feel ashamed. Just because it’s not obvious to people looking at you or it’s difficult for doctors to diagnose doesn’t make it any less real.”

He went on to say, “I can understand how it could affect doing a job or relationships. I get how people question your sanity and have home remedies for everything. But the key is finding a doctor that truly understands the options available and has a track record of finding solutions. I would also say that it’s OK to find the ‘hacks’ that work for you. In my case it was Valium. I shot an entire season of shark tank while taking Valium. I started at 10mg and figured out how to push that down to 1mg. Find what works for you and use it till you get things figured out.”

Mr. Cuban is a passionate supporter of the U.S. Military, investing in numerous veteran-run businesses and establishing The Fallen Patriot Fund. VeDA supports veterans who are experiencing vestibular symptoms due to traumatic brain injury, noise-induced otolith disorder, or neurotoxicity due to medications like mefloquine with information and resources.

We asked Mr. Cuban what he would say to members of the military who are reluctant to seek medical help for their symptoms related to vestibular illness or damage, especially when there is a stigma attached to those symptoms?

Mark Cuban: “There is no stigma. Get the help you need.”

If you or a loved one experience dizziness, imbalance, or other vestibular symptoms, contact VeDA at 800.837.8428 or visit our website at vestibular.org. We can help you learn about your condition and get connected to qualified vestibular healthcare specialists and support networks so you can restore balance and regain life.

Newport-Mesa Audiology Balance & Ear Institute is one of the country's leading practices for the research, diagnosis and treatment of patients with vestibular dysfunction – one of the leading causes of dizziness, vertigo and balance disorders. Serving patients from all over the U.S., the Institute’s team of doctors of audiology utilize advanced, state-of-the-art technology at two locations - Newport Beach and Ladera Ranch, California. The Institute provides both comprehensive diagnostic testing and proprietary Advanced Vestibular Treatment™ (AVT) with more than a 90 percent success rate. A full spectrum of audiological solutions is also offered to enhance hearing health, including adult and pediatric hearing loss evaluation, advanced hearing devices and tinnitus treatment. Since 1977, the Institute has served over 50,000 patients. 500 Old Newport Blvd., Suite 101, Newport Beach, CA 92663 | 949.642.7935 | www.dizziland.com.