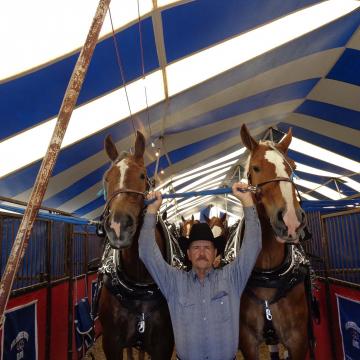 For me it is about taking it one day at a time, always learning, always seeking, never giving up, and staying positive.
Ménière’s disease

My vestibular story starts in May of 2016. I am semi retired and at age 65 was thoroughly enjoying life that beautiful spring morning. It had rained during the night so I was walking in the pasture to check the water gaps (for city folks that's where a fence crosses a creek or waterway). The runoff from the rain can wash the water gap out and livestock can get out onto the neighbors place. So, I got about 100 yards from the house and out of the blue with no warning, I experienced incredible spinning vertigo and started throwing up. Went to my all fours and it felt like someone was pushing or sitting on my right shoulder. I figured out if I closed my eyes I would stop throwing up. So, I crawled back to the house like this throwing up every time I opened my eyes to see where I was going. I didn't know if I was going to make it. But, I made it to the house still throwing up and finally the ambulance picked me up. I spent 12 days in the hospital. For four days I could not walk. I had continuous migraines with extreme double vision for several days before they finally gave me something by IV. They thought I had a stroke but tests proved negative.

Finally, I was released in a walker and told not to drive or walk anywhere without the walker. No diagnosis. So, at home, I decided to see if I could get some idea what this is online. It didn't take long to figure out it had to be vestibular. I read about sudden drop vertigo and it fit perfectly. So, I figured out that I needed to see a neurotologist. Had to get family to drive me 3 hours to one. He told me I had Meniere's and that I needed a steroid shot in my ear or surgery. By the time he diagnosed me I had been having some success with VRT, so I refused his offer. I continued with VRT for 6 months and was released at 95%. I thought I was home free. So, life was good until June 2017. Again with no warning my dizziness increased, along with nystagmus and bad head pressure. This time I went to another neurotologist and he said I had labryinthitis in the beginning and that I now had endolymphatic hydrops a form of Meniere's. He prescribed a very light diuretic to reduce the pressure in the endolymph fluid of the inner ear. He also told me to reduce my sodium intake which I did. He also warned me that allergies make the symptoms worse. I take the allergy shots and antihistamine every day.

I also read everything I can find and learned that I really needed to clean up my diet of processed foods. I learned I can have one cup of coffee in the mornings. Very little sugar or dairy, wheat, no tobacco, no alcohol. I was also diagnosed with vestibular migraines a few months later. For a long time I didn't want to take any more medications except for when I actually had a migraine. Then recently they became too much and I am taking a preventative. I have learned it is important to figure out the triggers for both Meniere's and VM. This is very much trial and error. Sleep and rest is so very important.

In October of 2017, I started having trouble with my eyes. I couldn't read more than 5 minutes, couldn't judge distances well driving, and it felt like I was seeing with binoculars with no peripheral vision. Someone mentioned binocular vision disorder or heterophoria. I found one three hours away from me and sure enough I have both horizontal and vertical heterophoria caused by a concussion playing football 50 years ago. This helped me in so many ways too and was the final piece of the puzzle for me.

I am doing good now and even have some trips planned in the coming months. It has been a long and rough journey but I made it. Am I cured no, but I figure around 80% with mostly good days. My faith in God sustains me and gives me great peace through all of this. For me it is about taking it one day at a time, always learning, always seeking, never giving up, and staying positive. I hope and pray someday there will be a cure, but until then I will keep putting one foot in front of the other....