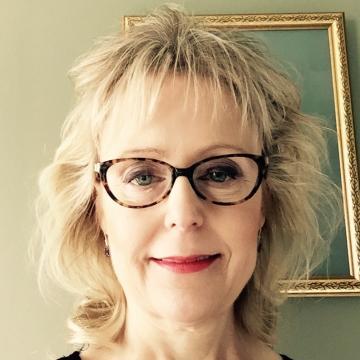 Hi, my name is Peggy Artman and I am 47 years old. My story from the beginning of my dizziness symptoms to an eventual diagnosis is a long one, but I’m going to try to keep this as brief as possible.

I grew up rather sickly with lots of allergies, colds, and ear infections as a child, which has continued on into adulthood. If I’m around someone that is sick, I am likely to catch it, especially in the fall and winter.

The reason I mention this is because migraines and sinus infections can become confused with each other because they can have the same or similar symptoms including congestion. When I was in my 20’s, I had a job where I worked in a department store, so I was perhaps exposed to more germs that I would have been in other settings. I remember having more colds, ear infections, and sinus infections than I did in college. This went on for several years and remember that by the time I was about 26, I thought I had serious sinus problems. I was dizzy, nauseated, and in pain all the time, but it was a feeling that was hard to explain.

I was prescribed many rounds of antibiotics by several doctors and none really tried to figure out the cause of my dizziness and pain. They usually would eventually order a CT scan of my sinuses and they looked normal so they would send me home with no options. The dizziness was disabling and I’m thankful that I was able to function by taking a prescription allergy medication that is no longer on the market for the dizziness. But as symptoms flared up again and again even with the medication, I never found a single doctor that knew anything about my symptoms. In fact, they refused to even discuss it and were very abrupt with me at times. This was very upsetting to me because I truly had no idea what was going on with me. I was scared because the dizziness never went away and I was afraid I would eventually become disabled from it.

I got married in 2006 and was never more physically miserable. So in 2008, I was desperate and tried several more ENT doctors because things had progressed to where I was having dizzy moments with the medication and the pain and exhaustion from dealing with it were wearing me out. I don’t even know how I was referred to the one ENT that was so kind and took the time to investigate my symptoms. He was not able to figure out what was wrong with me, but he suggested that it is possible I could be having migraines and referred me to a neurologist. This was a life changing event. By this time I was about 40 and had been waiting over 20 years for a diagnosis. This particular neurologist felt strongly that the dizziness was related to the migraines and prescribed a different medication along with a migraine preventive to control the symptoms.

I later saw a few other neurologists, but most were very abrupt with me and didn’t want to deal with my complicated symptoms. One doctor bluntly told me I was too complicated and he didn’t want to deal with a high maintenance patient. Later I found out that he and another neurologist said that because of the medication I’m taking for the dizziness.

Finally in May 2014, I got a phone call from a local balance clinic saying I was referred to their clinic for my dizziness. I had been told this clinic existed, but this doctor took 3 years to get around to referring me. I saw a doctor that was an expert in dizziness and it was an incredible experience because it was the first time someone actually understood my symptoms. I do not experience spinning sensations, it is more of a nauseating unsteadiness that is hard to describe. As we talked, he began finishing my sentences since he understood me so well! I had to undergo a Balance Function test, which was horrible but I’m glad I had it done because I found out that my left ear is 9% weaker than my right, but that there is nerve damage in my right ear. They called it “Isolated, Right Utricular Impairment”. The Audiologist said the nerve damage may have been caused by a virus, by ear infections, or by untreated migraines. The doctor diagnosed me with Vestibular Migraine, even though I have these issues that cause imbalances with my Vestibular System. He didn’t recommend Vestibular Physical Therapy since I had already tried that without success and he said I need better treatment for the Vestibular Migraine.