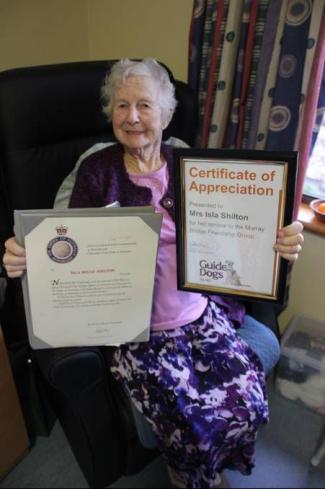 ISLA Shilton was not prepared when she was told of the disease which was taking her hearing.

An adventurous lifestyle drew to an end about 10 years ago for the 92-year-old Murray Bridge resident when she was diagnosed with Meniere's disease.

"I suppose I was in shock for a while, and then I wondered what I could do about it, but there's nothing you can do," Mrs Shilton said.

"You think it will never happen to you."

Mrs Shilton had already had some hearing loss, which began in about 1987, but this disease affected her balance as well as her hearing.

"I will gradually lose all of it (hearing)," she said.

"It's a difficult disease, really ... my family don't want to get it."

Mrs Shilton said she had looked for signs of the disease throughout her family history, but thought back then it was not diagnosed as Meniere's disease, but vertigo.

"First off, they (doctors) thought it was vertigo," she said.

"They say it's not (hereditary), but I've got a sister 10 years younger who's got it.

"She went deaf just after me."

Mrs Shilton said suffering from the disease made things "awkward".

"It made it hard on the younger kids, they didn't know what was going on," she said.

She said one of her sons had suggested learning to lip read but she ignored him, and in hindsight she probably should have given it a go.

"The worst thing is when you're having a conversation in a group, I do not know what's going on," she said.

In 1993, she received a cochlear implant in her right ear to better her hearing.

"It made a difference, of course - it was wonderful," she said.

She also has a hearing aid in her left ear to enhance the sense.

Her hearing loss was why she got involved with the hearing dogs section of the Guide Dogs and helped start up a friendship group as the first president.

"It gradually picked up again."

She said the group donated a significant amount of money to the Guide Dogs over the years.

"We'd put in $2 each every meeting, and we had no expenses," she said.

"Jessie Bormann would sell all her chrysanthemums on Mothers' Day and give the money to Guide Dogs."

Mrs Shilton said she worked with the group for about 10 years and had been to their monthly meetings since she joined.

"We used to have different places to meet ... sometimes we went for a day to Strathalbyn," she said.

She said the group provided unique support and helped with any problems, such as how to work their special telephones.

"There's only one other group in SA that I know of, at Mount Gambier," she said.

"You'd encourage people to go to the meetings, so people would know what to do."

But before Mrs Shilton went deaf, she was a part of many groups, including the Women in Agriculture and Business, where she received her 50-year badge, and the Associated Country Women of the World.

Through her involvement, she was able to travel to places like Scotland, Holland, New Zealand and America, and she spent four months in England and went to five world conferences, including one in Germany.

"We were taken to private homes, which made it so much better to see how they lived," she said.

She said her favourite memories included seeing foreign people wearing their national dress, and one of her favourite places to visit was Scotland.

"Because my mother had come from Scotland, I always wanted to go back and see what it was like," she said.

In 1979, she had the opportunity to travel again, this time in the form of an exchange to Japan.

"I was wandering around like a lost sheep ... then I saw it in the paper for people who wanted to travel," she said.

"I got granted $2000 to go to Japan with an Australia to Japan Travel Foundation Grant."

She was given a mission to promote goodwill and friendship on the trip.

"It's an interesting place, it's so different to what we've got here," she said.

Mrs Shilton was awarded one of the highest honours in 1994 for her service to women - an Order of Australia Medal.

"I had to go to Government House to be presented with it."

She said before the presentation - made by Australia's first female Governor, Dame Roma Mitchell - she had to keep quiet.

"I was not allowed to tell anyone," she said.

"We don't get to hear who nominated me or anything."