When Sounds Are Too Loud 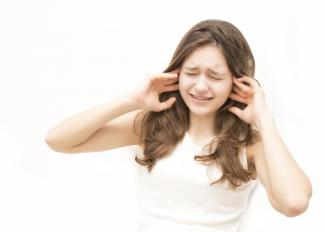 Hyperacusis is hearing disorder that causes ordinary sounds to be perceived as unbearably loud.

July 4th is the United States’ “Independence Day,” known for its picnics, BBQs and fireworks.

Hyperacusis is hearing disorder that causes ordinary sounds to be perceived as unbearably loud. For example, for a person with hyperacusis these ordinary sounds may lead to a physical and psychological response:

Often by the time a person seeks treatment, their sensitivity to noise has progressed to an unbearable level. This disorder can start with mild sensitivity to sound, which continues to increase. As a person is dealing with these symptoms they may develop anxiety and other physiological and psychological symptoms. Fortunately, hyperacusis is a rare disorder. It affects 1 in 50,000 people.

There is no medical consensus on what causes hyperacusis. There could be several reasons why this disorder exists. It could be caused by ear infections, traumatic events, gun blasts, and the side effects of an autoimmune disease. Many believe that this condition is mostly caused by a traumatic event, such as a car accident involving whiplash. One thing that is known is that many people who experience hyperacusis also have tinnitus (ringing in the ear). However, there is no proof that tinnitus causes hyperacusis.

There is no cure for hyperacusis, but there are some treatment options.

Complementary therapies can help some people, but more research is needed to prove the efficacy of these treatments. The most popular complementary treatments are acupuncture, sound therapy, and relaxation exercises. Another experimental treatment is auditory integration therapy.

Around 2010, Karen noticed that she was gradually becoming more and more sensitive to certain sounds. The sounds that bothered her the most were two-way radios, public announcement systems, live music, movies in theaters, beeps and dinging sounds, engines running, babies crying, pots and pans, and squeaky hinges. These sounds continue to be bothersome to her.

Eventually Karen found a specialist who diagnosed her with hyperacusis. While she knows that there is no cure for this disorder, she maintains a positive attitude and has found ways to manage her symptoms. The things that have helped her most are:

In a recent paper, Drs. Debby Feinberg and Mark Rosner noted that in TBI patients with binocular vision dysfunction and hyperacusis, symptoms of dizziness and imbalance improved when patients were treated with noise cancelling headphones. You can read more about this research here.