View This Section's Articles
| What is Vestibular? | Your Balance System | Vestibular Injury

The body can compensate for vestibular injury by recalibrating the part of the brain that controls balance. This vestibular compensation process occurs naturally in most people, but when it is not successful, vestibular rehabilitation therapy may be required.

The vestibular system includes the inner ear balance organs and the parts of the brain that coordinate and process balance information. The balance organs contribute vital sensory information about motion, equilibrium, and spatial orientation. In addition, the vestibular system helps maintain clear vision during movements via an automated function called the vestibulo-ocular reflex (VOR).

The vestibular system can be compromised in many ways. Viral or bacterial infections (labyrinthitis and vestibular neuritis), disorders that affect inner ear fluid levels (Ménière’s disease and secondary endolymphatic hydrops), trauma from head injury (mild traumatic brain injury or mTBI), benign tumors (vestibular schwannoma), and age-related degeneration can all cause permanent damage to the vestibular system.

The body has limited ability to repair damage to the vestibular organs. However, the body can compensate for the vestibular injury by recalibrating the part of the brain that controls balance. This vestibular compensation process occurs naturally in most people, but when it is not successful, vestibular rehabilitation therapy may be required.

When a sudden injury occurs to the balance organs on one side, the patient may feel very sick for hours to a few days with vertigo (a spinning feeling), lightheadedness (dizziness), and unsteadiness, often accompanied by sweating, nausea, and vomiting. This is because the spatial orientation signals sent to the brain from both ears
are no longer equal and opposite, and the brain interprets the difference as constant movement.

Researchers theorize that after this initial period, the brain recognizes that the signals being received from the ears are incorrect and turns the signals down through a process called the cerebellar clamp. When the clamp is in place, the vertigo and much of the sick feelings improve. However, the patient feels unsteady while standing, because the vestibular signals normally used to maintain balance have been reduced.

The patient may also report disorientation or blurred vision during head movements because the VOR no longer functions properly. In addition to the vestibular system, proprioception (the sensors in the muscles, joints and at the bottom of the feet) and vision provides information that is necessary for maintaining balance. So without vestibular input, the patient can still walk but will feel unsteady and may fall in the dark or on soft or bumpy surfaces such as a thickly carpeted floor, grass lawn, or gravel path.

At this point, most patients are well enough to get out of bed and visit a doctor. The doctor sees a person who is not experiencing dizziness or vertigo but whose gait is ataxic, meaning awkward and uncoordinated. If the patient is not given an opportunity to clearly describe what has happened, he or she may be immediately referred to a neurologist to rule out stroke because of this ataxic gait.

After the initial compensation phase, the cerebellum slowly releases the clamp, gradually allowing more signals from the inner ear to pass to the brain. The brain can then fine-tune its calculations in order to account for differences between the signals received from damaged versus undamaged vestibular organs. Such compensation can’t occur if the cerebellar clamp remains in place. 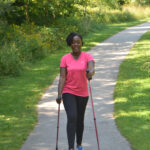 For most patients, the movements made during normal daily activities are enough to achieve chronic (long-term) vestibular compensation, usually in two to four weeks after the injury has occurred. Once this chronic compensation process is complete, the patient is essentially symptom-free. If unsteadiness and/or motion-provoked dizziness persist after that time, compensation is not complete and the physician may prescribe a program of vestibular rehabilitation therapy (VRT).

VRT is a treatment program administered by a specially-trained physical or occupational therapist. It is designed to (1) desensitize the balance system to problematic movements and (2) enhance the fine-tuning required for long-term vestibular compensation. This is accomplished with exercises that involve small, controlled, and repeated “doses” of the movements and activities that provoke dizziness. VRT is most effective when administered by a therapist who has specific training and experience in this specialized form of therapy. Read more about vestibular rehabilitation therapy.

If the patient describes another severe attack of spinning with unsteadiness and nausea lasting hours to days, this suggests that a second injury has occurred to the balance system, such as another viral infection or an attack of Ménière’s disease or secondary endolymphatic hydrops. These conditions require diagnosis and medical treatment.

If the patient reports that dizziness occurs after particular head movements and lasts seconds to a few minutes, this suggests one of two things. It is possible that the patient has developed benign paroxysmal positional vertigo (BPPV), which is common after some vestibular injuries. BPPV can be diagnosed and treated effectively using simple procedures. If the patient’s symptoms turn out to be unrelated to BPPV, then the most likely explanation is that decompensation has occurred. Decompensation simply means that the brain has ‘forgotten’ the fine-tuning it developed during the chronic compensation phase described above.

Events that can provoke decompensation include a bad cold or the flu, minor surgery, or anything that interrupts normal daily activity for a few days, such as long trips. Recovery after decompensation is exactly like the recovery that occurs during the chronic compensation phase. Movements and activities are the stimuli the brain needs to fine-tune the system. We recommend that patients keep their VRT exercise program instructions available even after they recover so that they can begin the exercises immediately if symptoms return. Usually recovery after decompensation is quicker than the
time it takes to recover after the initial injury to the balance system.

Two things are required in order to compensate for an injury. First, the brain must continue to receive signals from the balance organs so that it can learn how to interpret different head movements. Thus, movements must not be avoided, because they create the signals the brain needs to compensate for the injury. Second, the areas of the brain that are responsible for compensation must not be damaged.

During the early stages of dizziness, patients may avoid quick movements and reduce their activities. Most patients will also be prescribed one or more anti-dizziness medications such as Antivert (meclizine), Valium (diazepam), Xanax (alprazolam), Phenergan (promethazine), or Compazine (prochlorperazin). This is fine during the acute stages of dizziness. However, once the acute phase is past, inactivity and medications can interfere with the long-term compensation process.

Brain damage caused by stroke, head injury, or other causes can slow down or stop the natural compensation process. It is difficult to predict which patients with brain injury will improve or to what degree, so all patients should be given the chance to improve through a VRT program. There are several different measures of symptoms and functional capabilities used to assess progress repeatedly as treatment goes on. As long as a patient continues to show improvement, even if it is gradual, treatment should be continued.

Trouble Getting a Diagnosis?

Why is it so difficult to find a diagnosis for vestibular disorders? Many people who suffer from dizziness, imbalance, or vertigo have trouble finding out why. Dizziness and vertigo are not actually “diagnoses,” they are